The beginning of Summer break has consisted of baseball, softball, and more softball. We should be used to this chaos that lasts from Memorial Day through the first week of July since I’ve been coaching Ri’s team for the last three years and Mario’s been playing baseball during that time, but this year feels different. I think it’s because Mario’s games are more exciting due to him making great plays and big hits, and Ri’s games are exhilarating between the sliding and the third-dropped-strike rule. I am a nut job during Ri’s games trying to watch for the dropped strike, the runner stealing, the fake bunt….

Mario looks like a pro baseball player in an eight year old body. He is in position before every play and in the batter’s box swinging away before he gets up to bat. He loves baseball this year. One reason why: he’s the oldest on the team this year. He’s one of four second graders. The rest are first graders. And he is one of the best players on the team. Hence, super stardom at every game when he makes an out or gets a hit. And he’s been making them like mad. He got all three outs on numerous occasions. He’s hit quite a few doubles. And his face is priceless when he gets an out. He hears the cheers but he just keeps on his game face and stares straight ahead. Mr. Cool.

And holy cow, Maria! She has stepped it up to the nth degree this year. The first game, she caught two fly balls. Jon and I stood with mouths agape, so proud of her. And unlike Mario, she shows her enthusiasm. She smiles as wide as the outfield and does a little dance shuffle. It is so sweet. I keep wanting to get a picture but since I’m coaching, I have no ability to think about a snapshot. Strategize, strategize, strategize.

Jon and I are both so impressed with Ri. She has made nearly every catch thrown to her. I’m playing her at first base and she is covering it like a glove. She’s completely aware and ready during the games. She moves. It’s a beautiful thing that was not seen much by any of the girls last year. This year is a different ball game.

I hit the jackpot with my team this year, too. All the girls root each other on and have a great time together. I have a sixth grader from another school who is a star pitcher and batter. She’s got a heckuva arm and hit one to the fence the other night. But she is the most humble and considerate girl. She cheers on the other pitchers who are struggling to make it over the plate. She gives tips to the girls up to bat. She never whines or gets mad when we lose a game. She’s been an awesome 6th grade leader. Ri has gotten close to her over the past few weeks and looks up to her. Ri has stepped up to lead the team as well. It helps that she has her mother’s lungs and so it’s easy to scream for the girl up to bat or pitching on the mound.

Ri cranked it the other night as pitcher. She had not been happy with her pitching a couple of games back. She had gotten some walks and gotten hit on a few times. She looked at me several times and whispered “pull me.” Yea, I’m serious. The girl gets really frustrated, really quickly. We are trying to work with her to calm her emotions down and take deep breaths. It’s the only way she will be able to pitch well, much less have fun with the game. I’m so happy to have Jon near me doing the scorebook because he’s able to grab her when she’s upset and talk some sense into her (or give her a wet willy).

I took her out to the front yard before our game this past Monday to throw with her. She started to get angrier and angrier with each minute because she was throwing balls and only a rare strike. After ten minutes, she threw her glove down and ran inside. She was hysterically crying and telling me she could not play. She didn’t want to lose. She didn’t want to mess up. She was hugging me and sobbing. I felt so badly for her and was worried because I had not seen her act like this before. After a few minutes, she settled down and laid her back against the kitchen wall. I rubbed her back and got her water. After some breathing exercises, we drove down to the game. She jumped out of the car – completely unphased by the past twenty minutes –  and chatted it up with her teammates while they watched the remainder of the game before us.

I put her on first base the first inning and she made an out. When she came in for the bottom of the inning, she said she wanted to pitch. I told Jon if she started to flip out, I’d have to pull her. But what did she do? Threw strikes and caught a pop up ball to get out of the inning with no runs scored. She was so charged up. And the next inning, she hit a double! Oh, the intense feeling of joy you get when you see your daughter in her element and so happy. I was at once relieved and excited and proud. She had a heck of a night. I think melt-downs pre-game may need to occur in the future…. 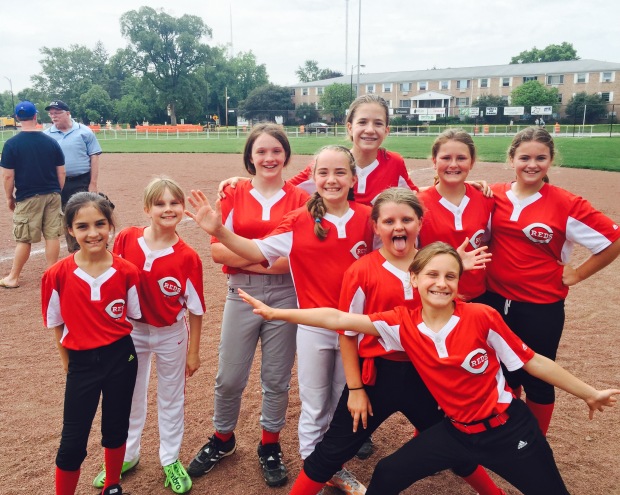 As hectic as June is with baseball and softball, Jon and I would not change a thing. It is a treasure to be able to watch our kids play hard and achieve new feats (as well as learn how to deal with the hardship of a missed play or loss). And I get the added boost of being able to coach a group of girls who love the game and want to learn and succeed. Couldn’t ask for a better start to the summer.