Bus fare has risen to $2 a trip. Am I showing my age when I complain that it used to be 50 cents? The kids and I decided to take the COTA bus downtown to visit Columbus Commons last Friday. I had one more day of vacation left so I wanted to do something different. I’ve always wondered what their Fun Fridays were like (I had read that they had inflatables and carousel rides).

We walked (without much complaining for once!) up to the bus stop a few blocks away and waited for the No. 5. We timed it pretty good with only a 10 minute wait in the 90 degree heat. The kids said hi to the driver and deposited their cash. They chose where they always have chosen – the back of the bus. While we rode, we guessed the years on the pennies in my purse and created different faces for each other on some crazy app Maria had on her phone.

The kids pulled the cord to signal our stop on Town and High. We hurried across the street to the Commons only to find scores of young kids waiting in line for the inflatables. I sighed on behalf of Ri and Mario but they were good sports. We walked over to the carousel since it didn’t have a long line. Ri and Mario chose their horses and asked me to stand with them (that was unexpected). After the carousel, we walked over to the police and fire stations. The kids shook the two policemens’ hands and walked towards the fire trailer. The one policeman stopped me and asked if Mario was my kid. I said yes. He shook his head and laughed.

“That kid is gonna be famous some day; mark my words. He came towards me and I stepped back like whoa, he’s strong and good-lookin’ as heck!”

The fireman gave us a demonstration on fire safety and then had us crawl through a small smokey room. Ri and Mario had done it at school, and were strangely excited. We left the trailer and visited the football station where you throw a football through the hole in the placard. Mario impressed the young volunteer manning the station and threw it in the hole. Meanwhile, Ri helped a little girl hit a baseball. Her mom commented on how sweet Ri was. All sorts of compliments about the kids that morning!

We hit up Subway for Mario and went to Zoup for Ri. We had to head back to Subway to get Mario a second sandwich and Ri a cookie. We sat there awhile and people watched.

After lunch, the kids decided the lines at the Commons were too long and they would rather head home and clean with me. Yea, right. They just wanted to get back to the AC. I didn’t mind though – this 90 degree weather is nasty.

On our bus ride home, we chatted it up with a tall African American kid. He talked about visiting Senegal where some of his family lives. He described how hot it was, and the huge snakes he saw there. Mario was enthralled while Ri asked question after question.

We pulled up to our stop and descended back into the heat. The kids forgot we’d have to walk back from the bus stop. Mario got a piggy back ride while Ri hoofed it out with me. We chilled the rest of the afternoon, cleaned some (very little) and played some, and I enjoyed one last day of vacation with my munchos before it was back to work. 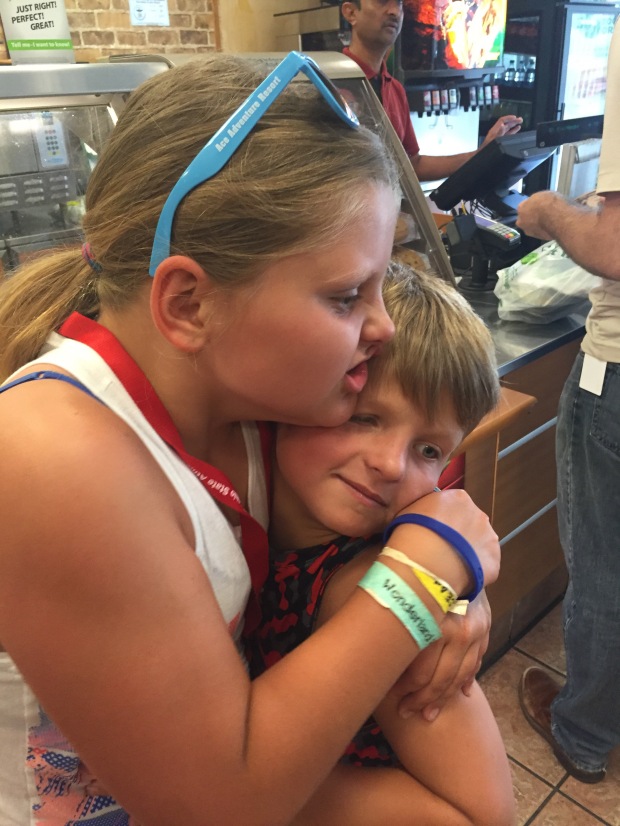