Basketball has never been my sport. I don’t know any of the plays involved in it, and can barely shoot a lay up even when nobody is blocking me. But I love the intensity of the game and the great work out. Maria played with her gradeschool friends last year and had a decent time (mostly because she was with her friends and the coach was a good friend of mine who she’s always liked a lot).

It’s been a long season so far. They had no wins until this weekend when they pulled one out against Dublin. Ri has struggled with understanding plays, especially offense (however, she does know how to disorient the opposing player who is throwing the ball inbounds – she is a spaz waving her arms and jumping up and down and screaming). She doesn’t get as much playing time as the others although she makes it to every practice. If it was me, I’d either have called it a day and quit or would be outside dribbling and shooting three hours a day.

I said as much to my stepmom the other day as we were catching up. I was laughing at how different Ri and I are in dealing with situations. Her response:

I thought about our conversation as I drove home with Ri in the backseat watching Dance Moms and petting Rocco. Ri has a very different approach to sports than I did at her age. I needed to rock everyone’s world with my athleticism; I hated losing. She does not have that intensity and need for glory. She could probably take sports or leave them, but for her friends being on the team. She sat on that bench during the last game knowing she likely would not go into play but still rooting for her teammates nonstop. She does not let the fact that she does not play a lot ruin her experience. I envy her for that. She finds joy in the social time with her friends. Don’t get me wrong, she does enjoy a win, and when she plays, she tries with all her might. She gets upset with the rest of the team when they aren’t playing well or the other team is trouncing them. But she can shake it off quickly and move onto the next thing. And she can give consolation and a lift-up to her teammates who aren’t able to move on 30 minutes after the game.

When they won on Saturday, she was ecstatic lifting her teammates in the air and hugging them all. She projects joy and I’ll take that any day over a lay up. 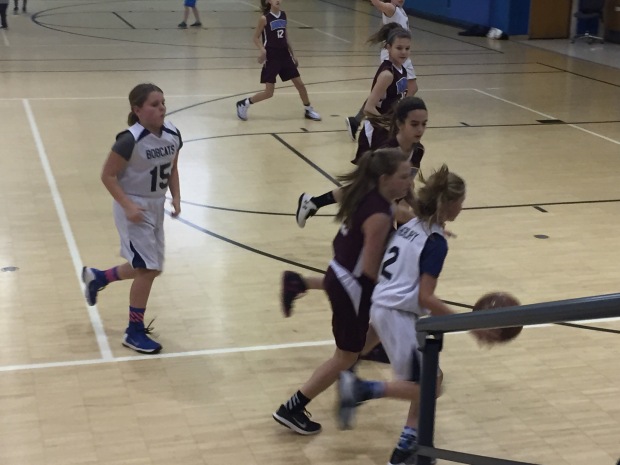