Sundays can be rough for me. I know I have to get up early the next morning, start a new work week, make sure the kids get homework done, take them to practices, make lunches … but they become much more tolerable when I can start them with a Stauf’s coffee and scone with my babies.

Of course, we all enjoy different modes of transportation to Staufs: Maria roller skates, I walk, and Mario bikes. Ri talked about a trip to California and how excited she’d be to visit the Kardashidans’ house. Mario wants to hit Hollywood with the hopes of being spotted as the next heartthrob movie star. Always interesting conversations heading to Staufs.

At Stauf’s, Mario decided that he wanted to try a latte. The boy wants to be 25 years old so badly. I decided to allow him to try it with the thought that he would inevitably hate it and then I could drink it. It was a piece of art when it was delivered to us. Maria had to Instagram it.

Maria got her everything bagel and onion cream cheese, Mario got his black Russian bagel with cream cheese, and I got my yummy chocolate chip scone. We decided to play the political question game that Stauf’s houses in a game cabinet. The first question was “what foods best embody America?” Without hesitation, Maria shouted “hamburgers and fries!” Mario went with hot dogs and apple pie. The next question was “describe a holiday you’d create.” Maria said that she’d create a “giving” holiday in June that would be exactly six months after Christmas. It would be a holiday where everybody would give to the poor and the needy and not take any gifts themselves. Sweet. Mario pondered the question for a bit and then decided that he would go with the “after Super Bowl holiday.” He was looking out for his immediate interest.

After Stauf’s, we hit the old church park we used to go to all the time. We even managed to still be able to all go down the enclosed slide together. 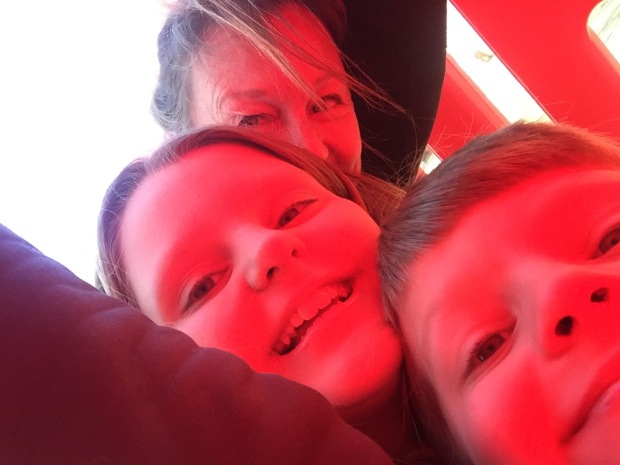 But the most fun was the swings. Mario started a jumping contest. He had me give him an underdog push and when he got as high as he could, he’d jump off – sometimes on his feet and sometimes on his side and sometimes in a roll. Ri was nervous but then did her typical Ri move – she swung her arms and stood tall and pronounced “if Mario can do it then I can do it!” And she did (although she did land on her side the first time but quickly shook off the pain). 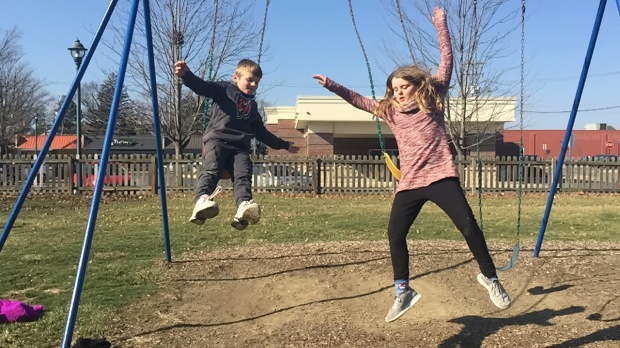 We spent nearly an hour trying to choreograph a simultaneous jump. This is as good as we got.

The sun was shining as we walked home, and I couldn’t have been happier. Now, to just keep this feeling later in the evening when Sunday evening blues creep in….