Mario went on his first three-night camp adventure two weeks ago. He heard Maria talking excitedly about the camp last year and wanted to go this year. It was the first year that he was eligible since you have to be going into fourth grade. I signed him up late; he was waitlisted at about number 50 when I checked on it in late May. The topic came up at the dinner table one night and I let him know that I was not sure he would be able to get into the camp. This fact led to many tears and anger and sadness, which led me to many phone calls and pleading and begging. I found out two other mothers were in my boat and had switched their sons to a different time – over the July 4 holiday. There were not a lot of kids signed up so I was able to get Mario in. I told him that I had worked some magic, and he was so excited.

As the time I got near, Mario seemed to have a bit of trepidation about the trip. He was not so much concerned about spending the night at the camp, but about his two buddies and how he would fit in. His two buddies are very close, and he was worried that they would partner up the entire time and he would be left with no one. I tried to explain to him that the reason for camp is to make new friends and that he would make new friends in his cabin. His response “I can’t make new friends because I will never see them again after we leave camp.” I told him that we could easily drive around Columbus to have a play date with a new friend. He looked at me like I was crazy. We let it be at that. I didn’t really mention anything more about the trip and he didn’t either prior to it arriving on a Friday morning.

The night before he was to leave, he and I packed up his things. Actually, I should say I packed up his things while he shot baskets in his room. Yeah, another moment when I should have made him help me out but I was enjoying him in his element making slam dunks and trying to impress me. He found a flashlight, which was really the only item he was concerned about being packed.  I kept hugging him through the evening and teasing him that I did not want him to leave me.

I came home from work early on Friday and took Mario to camp. As we drove over together, he kept asking me if I wanted him to stay. I think it was his way of being nervous but putting it on me. I told him that he would be just fine at camp as long as he let himself have a good time and not worry about who was hanging with who. The drop off seemed easier with Maria – maybe because more of her girlfriends were going – but I think also because Maria just tends to have a different attitude with these things. She’s more able to go and make new friends or just find fun herself. Mario needs to know his buddies are there and worries more about being cool and wanting to impress.

On a side note, Mario also gets freaked out when it is dark outside (because we have let him watch way too many horror films). He always needs me to come upstairs with him in the evening so I was a bit concerned that he may freak out in the cabin once night hit, and everyone would make fun of him.

When we arrived at our destination he grabbed his sleeping bag and slung his mesh bag over his shoulders. Two teenage boys greeted us under a tent. One of the kids’ names was Mario. Mario told him his name and the high school Mario didn’t react. I thought “come on, at least give him a high-five or something to make him feel more at ease.” My mama antennae were shooting up. We moved inside to the nurse’s line next and one of the high school boys saw Mario’s name tag. He put out his fist to Mario and said “I’m one of your counselors, Matt.” Mario fist bumped him and I felt better.

We found Mario’s two buddies and they hung out looking all cool while us moms talked about how we thought they’d do at camp. Mario seemed to be relaxed and they were all talking together so I felt good. 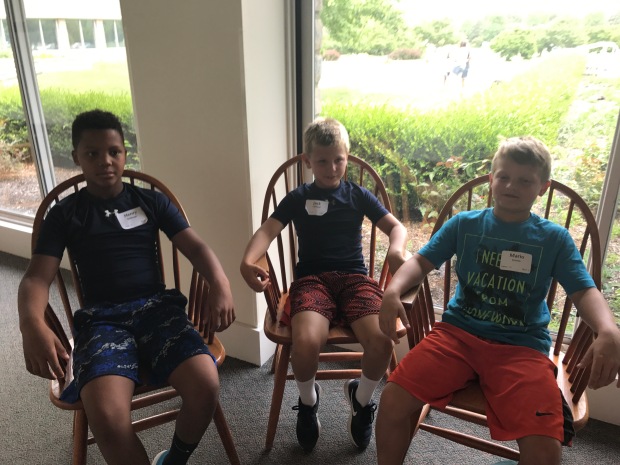 Then we started to see people walk out the front door. We grabbed the boys and told them we thought it was time for the departure. They moved outside with us still looking pretty cool. We made them take an obligatory photo for us. 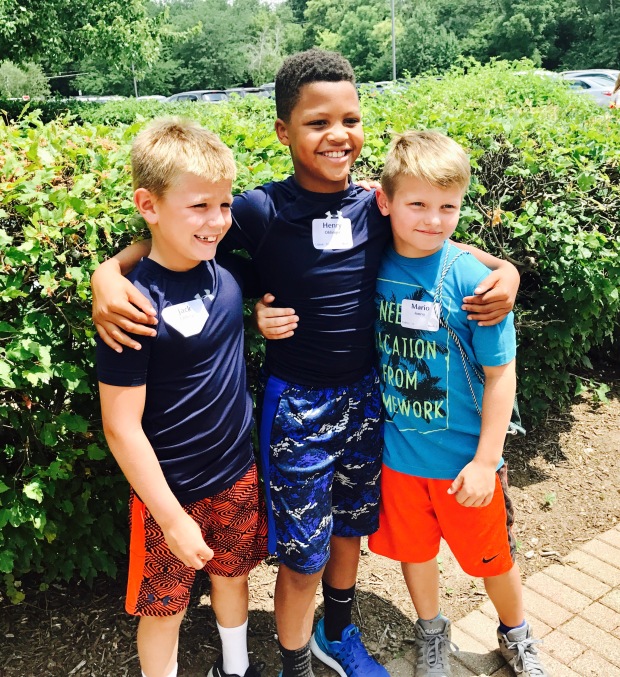 Then we moved them towards the buses. They still remained calm and collected, even giving me a wave when I told them to look back at me.

They finally got on their bus; I saw Mario’s two friends sit together. My heart dropped. I saw Mario slide into the seat across from them. Dammit.

Then, I saw Mario jump up and lean over the two boys out their window. He yelled “bye mom” and waved to me. Thank goodness. He sat back down and chatted with his buddies across the aisle. The two other moms left but I waited until the bus took off. I moved to the side of the bus where Mario sat. I waited for him to look out the window at me but he was busy talking with his friends. So when I saw some buses ahead starting to move, I yelled “bye Mario, I love you.” He looked out the window at me and for the first time I saw a bit of trepidation in his eyes. He yelled back “bye mom, I love you too!” He usually would be embarrassed to say such a thing but I think the nervousness got to him and he wanted to let me know that he loved me before I left. And then he was off. 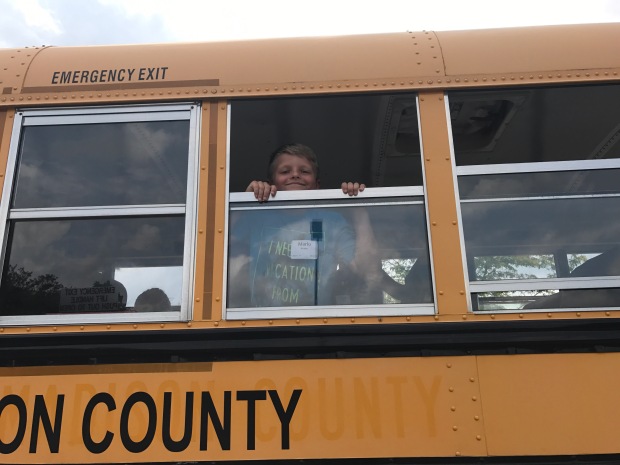 I only checked the camp website every 45 seconds to see if a picture was posted of him. Thank goodness there was the first night – he was smiling and running to the lake. Ahhhh.

There were more in the following days – not as many as I would have liked – but enough to make me feel at ease that he was alive and having a good time. Jon picked Mario up from camp three days later and brought him and Ri to my work for lunch. We peppered him with questions about his time at camp and we got one or two word responses. He talked about the soap slide and the lake and the hike. He thought the food was ok. He liked most boys in his cabin. It wasn’t until me and Jon were playing cards this weekend that we truly had some insight into what he did at camp.

“What are you guys playing?”

We told him we were playing Gin Rummy.

“How about we all play some blackjack?”

Jon and I looked at him with mouths agape.

“My counselors taught me how to play at camp. We would play for food each night. We can play for money if you want.”

And so there you go – no need for me to worry about him having a good time at camp. 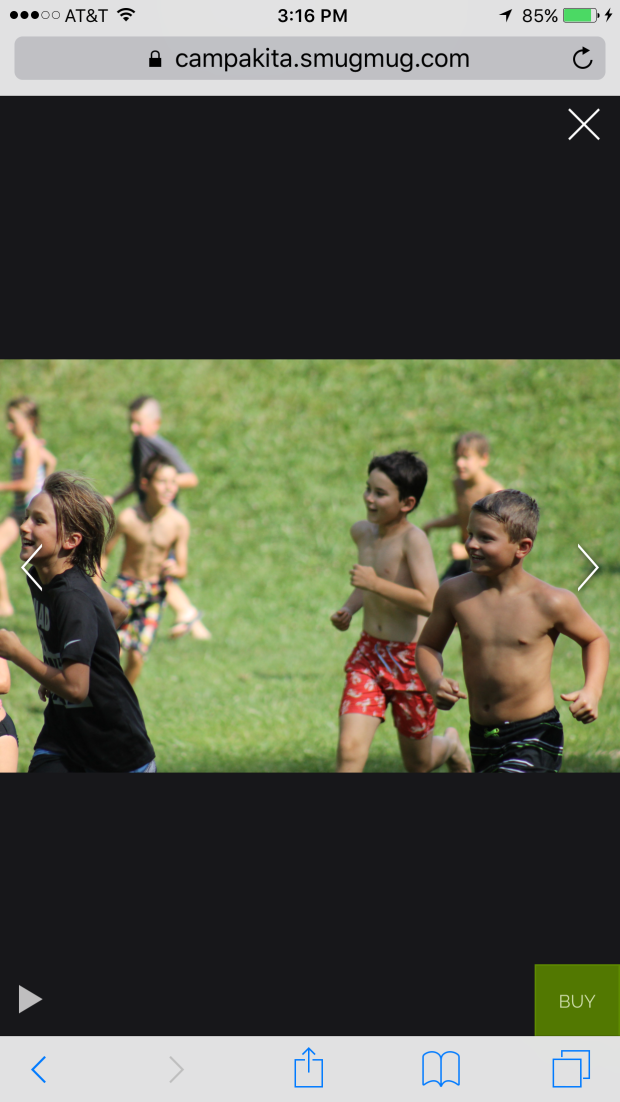