Maria mentioned going shopping for a dress for her seventh grade dance about a month and a half before the dance. Our weekends have been replete with Mario’s basketball games and Maria’s soccer games. We finally found a Sunday to shop. We decided to hit IKEA first to buy a couch we’d been wanting for six months, and then head over to the mall. But Ikea drained the entire family and none of us wanted to go to the mall, including Maria. She was willing to find a dress on the Internet rather than brave a shopping center (our type of girl). She perused the Internet off and on and reported nothing back to me. At some point, I realized we only had another week or so before her dance.

“I’m not spending $45 on shipping fees, Maria. So you need to find a dress in order for it to get here on time.” Sigh.

She found two black dresses off two different websites that I had never heard of before. She sent the sites to me and at 10 PM one evening, I got on the sites. They were ones that infiltrated you with 20 different advertisements while you were trying to check out of the site. They also wanted me to add my email address and personal information several times over. I was getting a bit concerned with the validity of the sites. But, I did not want my girl to stress out about a dress so I continued plugging away. After I completed the sales on both sites, I received email confirmations. The confirmation for the dress that Maria really wanted informed me that although they shipped within two days they may not have the dress for another couple of weeks. Are you kidding?! They did not tell me that information as I checked out, of course. The other confirmation email confirmed that it would arrive “soon.” Seriously? I spent the next hour trying to cancel my orders but had no luck. Frustrated, I searched for the dresses on Amazon. Why did I not look at that before I made the order? Amazon had the exact same dresses and I could get them in two days. I ordered them at midnight. What we do for these kids of ours.

Amazon came through, and we received the dresses two days after I ordered them. Maria loved one of them. She made a video for me trying both of them on and sent it to me while I was at work. It made my day. The dress she liked was classy. Black, off the shoulders, knee-length. Thank goodness. Jon and I are relieved not to have to worry about short, tight skirts and dresses at this period of time.

Two days before the dance, Maria, Mario, and I drove to Target to try to find black shoes. No luck. We tried two other places with no luck. We ended up back at Target. Maria pleaded for some stilettos but compromised with me on a pair of chunky heels. I bought her a little silver chain with a silver ball in the middle; I told her the ball represented the ball of energy she carried everywhere she went. 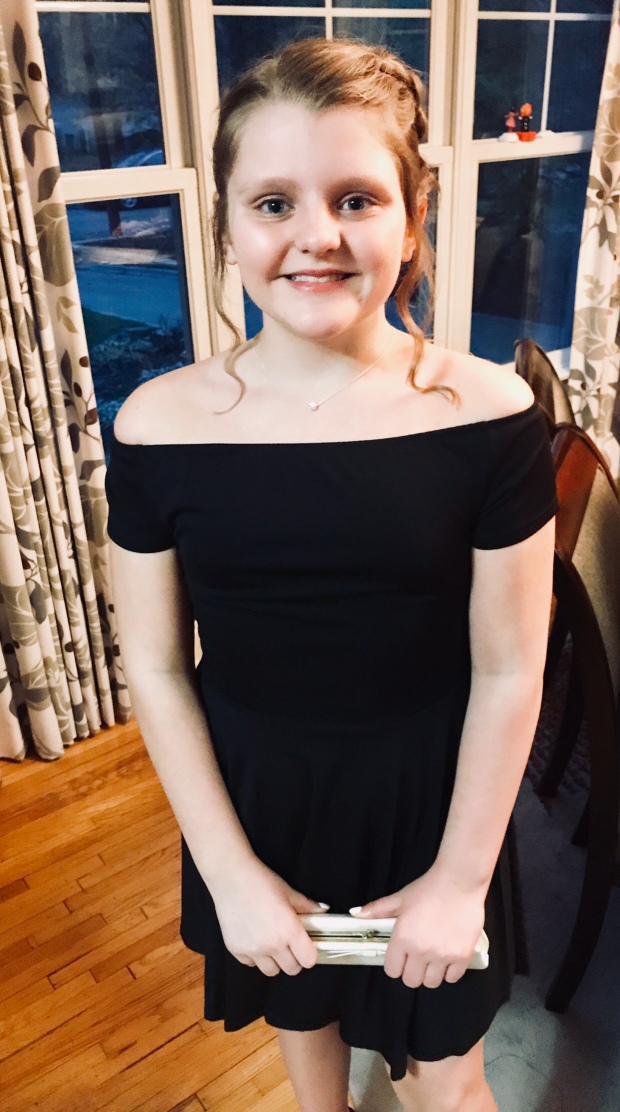 The day of the dance, Ri got her hair done at a salon. I had said no way to the request but Jon caved. He knew my horrible hair styling skills and felt bad for Maria. After her styling session, three of her girlfriends came over to eat pizza and get ready.

Maria allowed me to do her nail polish. Wrong move. I couldn’t even get that right. We had to have a girlfriend of mine reapply. She did cave in after the nail polish debacle and allow me to try her make-up. I succeeded on that front because she only wanted minimal application. I could handle that.

Next thing we knew, the girls went from Saturday morning chill wear to glamour red-carpet wear! Were these our baby girls?! 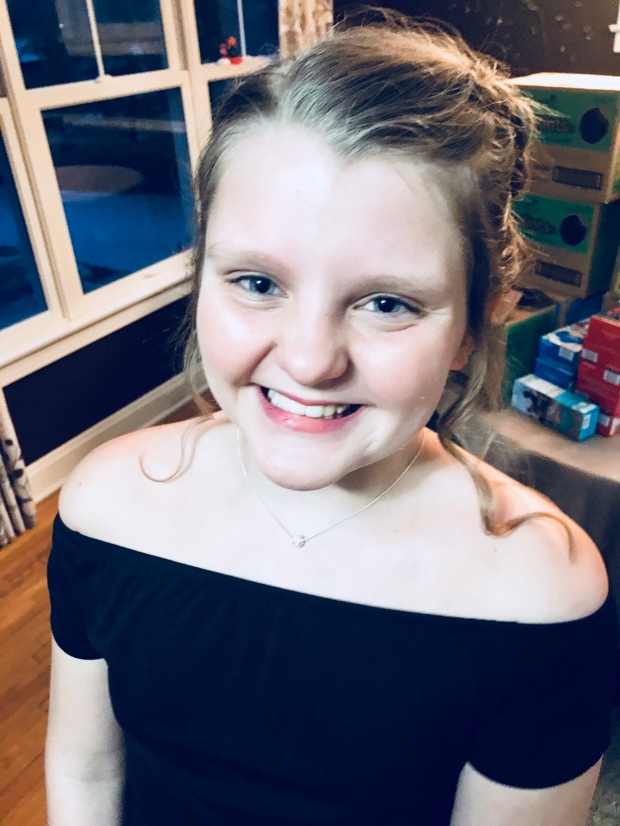 They we’re so excited to go to the dance. However, they wanted to keep their cool so they asked me to drive them around so that they would be dropped off at 6:38 instead of 6:30 when it started. Hilarious. Sure enough, there was a group of boys sitting at the picnic table when we drove by doing one of our loops. They were thinking the same thing.

I got a call at the end of the dance informing me that the girls would walk home. When they arrived, much to Maria’s dismay, her girlfriends told me that she danced with a boy. The boy being the boy that she has been friends with since she was in third grade. His nickname is Cookie and he is the sweetest boy in her class. They had video of the two of them dancing to the last song of the night. Again, hilarious. I liked that they were arms distance apart….

The night did not end for them, however. I had agreed that I would take them to a 10 PM movie. I dropped them off in their PJs. They said the movie was awful but they had a blast drinking their Icees and eating their cookie dough treats.