I know I repeat over and over to people the story of how I used to beg the universe to age my kids so they did not want me to make their lunch or play a game or go swimming or watch their magic tricks. Not to sound horrible- I loved doing those things – just not every waking second. I wanted a break every once in a while. They didn’t even know how to sleep in until 7 am – rising at the break of dawn and ready to roll.

Then it happened. They turned into teenagers and they fled the coop. I woke up at 9 am and they were still in bed sleeping or watching you tube on their phones. I asked if they wanted to walk to Stauf’s, and they declined. They would make their own breakfast when they were hungry. I offered to play cards or Monopoly but they had plans with friends. I turned on one of our favorite comedy shows but they had moved onto their own Netflix series.

Wait, hold up, not sooooo fast!

And so here I am reminiscing about the past, and how much I miss the moments I had wished away. I beg and plead, and then eventually demand, that the kids play a game with me (it used to be a walk until I had knee surgery; the kids thanked the heavens when they learned no walking for me for 12 weeks). There is typically a lot of sighing and complaining on Mario’s part; Maria has pretty much succumbed to my pressure. I don’t care though – I need connection with them even if they moan about it.

And indeed, Mario moaned last weekend when I told him we were gonna play a game before he could get on his video game with his friends. We decided on Kids vs. Adults trivia since we couldn’t find Monopoly. We laughed at Mario’s answers to questions – how does he not know where Venice is?! We made fun of Maria getting questions about movies, which she never watches. The kids teased me for constantly rolling the die to the “lose a turn” side. It was the best 45 minutes of my day because I had both of my babies by my side. 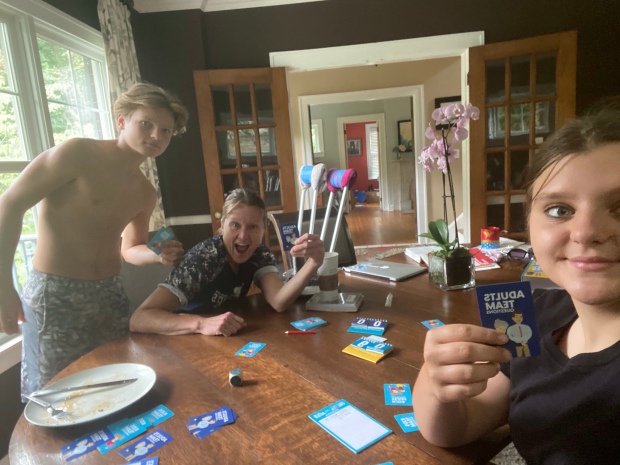 In fairness, the games we we play now are much more exiting than the ones we played years ago (god help me if I see Candy Land anytime soon). And the kids have quite the quips as we engage in play. They are mini-adults with strong personalities and convictions. They speak their minds. They have senses of humor. Their wicked smart. They love fiercely. They are independent.

All those years of loving the crap out of them and smothering them with hugs and kisses and listening to their stories and taking them to the pool paid off. They are fine humans. They know their momma needs connection, and they provide it even when their friends are hounding then to get on the latest video game or head to the thrift store. The time together is short – a game or two long – but so so sweet – and long enough to keep that thread taut between us.

One thought on “Connection”