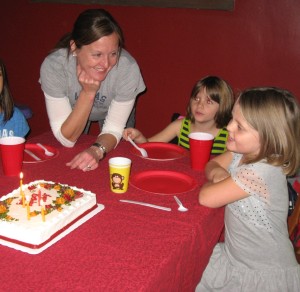 Really, did November 5 come again this year?  Maybe we skipped over the 5th straight to the 6th?  No, I feel one year away from 40 – November 5 hit for sure.  The legs are tight when I wake up, the knees creak a bit when I stand, I have to adjust my eyes for a few minutes to focus, and by the time the sun rises, I would have gone to the bathroom at least twice.  Ugh.

Riding in the Pelotonia

But I also have an incredible cadre of friends, two crazy spastic kids, one hilarious hubby, a heckuva cool family and good health.  Speaking of health, my birthday day started off with a long run and morning at the gym to lift weights (yeah, my hubby can think of about 1000 different activities that he would rather engage in on his birthday morning!).  I came home to a kiss from my girl even though I was sweaty (typically she makes me shower before coming near me) and a “hello” from my boy who did not change his position of refusing to touch me before I showered.

I walked Maria to school (riding her almost the entire way on my shoulders since we were running late – a daily occurence).  After dropping Ri off, I headed into work to be greeted by brownies from my assistant and happy birthday greetings from my Facebook friends.  Man, you can start to get a big head when you see all of the FB birthday wishes on your birthday.  I started bragging to my young cousin about all my birthday greetings, and she quickly informed me that all people have to do is hit a button in order to get an automatic happy birthday wish to “friends” of theirs.  Ahh, well, keep me humble.

Maria presenting me the gifts she wrapped.

I picked up Mario from school.  When I walked in his classroom, I got that gigantic Mario smile and that wonderful scream “Mama!”  When Mario and I stepped in the house, Maria was wrapping my gift with Jon.  Jon looked at me amazed.  “Do you know that your daughter is Martha Stewart? I wrapped your gift and reached down for tape and she had already tore a piece off and stuck it on her arm for me to use.” She LOVES to prepare gifts for people.  She loves cutting the wrapping paper, wrapping the gift, taping the paper, drawing designs on the paper, and presenting it.  She could not wait to give me my gifts.  She also asked Jon to buy my a card that she thought was hilarious.  It was a picture of a woman with gigantic boobs caught in metal traps on the ground.  Her husband is yelling “I told you to watch out for the booby traps!”  She sees that card with me when we are in Giant Eagle and she always takes a look at it.  I guess all along she has been secretly wanting to get it for my birthday.  Gotta love her humor.  She had Mario give me a card with a girl lifting weights since I love to workout.  She is precious.

We had Jon’s family over for cake and ice cream.  My favorite – sheet cake and chocolate chip ice cream.  Heaven on earth.  Everyone took off around 9 pm (including Mario who headed home with Grandma and Grandpa with no resevations – he LOVES heading north to be with them), and Maria and I played for a while.  She started to get tired around 10 and I took her up to lay with her in my bed.  I don’t think five minutes passed before we were both snoring away.  My dad came over at 10:30 after watching my brother play in his concert, but I had already passed out.  Pretty bad when your old man can party it up later than you.  But, hey, I gotta cut myself a break – my dad is a frickin’ machine.

Ri came back into our bed at 5 am, and snuggled against me to get warm.  There are not many other things that I can think of that bring me as much comfort as my girl’s arms wrapped around me and feet warm under my side (except for Mario on my other side doing the same).  The sun rose a few hours later, and I opened my eyes to my first day at age 39.  Bring it on, baby – 40 is still a whole year away!