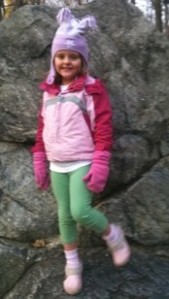 Maria on her rock

A year ago, Maria and Mario loved all of the Noggin’ shows – Dora, Diego, Max&Ruby.  We excused ourselves for letting them watch a few of the shows through the day because Noggin’s scientists told us in the beginning of the shows that our childrens’ brains would be much better off after watching their 20 minute show.  Then, in what seemed a nanosecond, Maria and Mario shunned Noggin shows in favor of one show only – Scooby Doo.  Ugh!  To say that I dislike Scooby Doo is a huge understatement.  I hated it growing up and I continue to detest it today.  M & M, on the other hand, adore it.

Maria doing her umpteenth pose for me

Maria talks about Daphne and her outfits and her make-up and her love for Fred.  I figured that Maria would take to her seeing that Maria can be obsessed about boys and high heels and make-up at times.  However, she surprised me on our “hike” the other day (a short walk through the local woods to the playground).  While she led me through the woods, she asked if we could “play.”  I agreed.  Next, she told me we would be looking for clues in the woods.  “Alright – got it”, I replied back to her waiting for her to tell me I was Fred or Velma.  But, to my utter surprise. she directed me to be Daphne, and she would play Velma.

She wanted me to talk about make-up and my high heels.  When I did, she responded with a sigh “Oh, Daphne…” and then proceeded to find clues on the ground and on rocks and in the trees to help us solve the mystery.  As we continued to walk towards the playground, I found myself smiling and feeling proud.  I would have thought that she would have loved to have been Daphne since that is what she seems to be “into” these days.  But when given the opportunity, she chose to be Velma, the smart, curious, independent one (talk about reading into a game!).

Maria daydreaming on her favorite tree

After the park, we strolled up to Giant Eagle to find a card for Jack, my little brother who turned 22 on Friday.  The first one she handed me had two girls with huge breasts on it asking if the card-reader wanted to get hot and steamy.  It opened up to the Car Wash song.  “What made you pick this?” I asked her.  She giggled and responded “It is for Uncle Jack, mom!”  Like that explains it… Uncle Jack would rather have a card with a saxophone on it then a big-breasted woman but whatever….  Maria likes to go for the va-va-voom.  We decided to go with a card that had a cat dressed up in a provocative outfit with the owner yelling to his wife “The cat is in heat again.”  Much more Jack’s style.

When we got home, Ri took a bath all by herself.  Mario was asleep.  She loves doing that now, just like my little sis, Sarah, used to do when she was young.  Sarah would sit in the tub for hours reading a book.  I could never last more than 15 minutes.  Maria may be heading down Sarah’s path – she stayed in for 30 minutes.  Then she hopped out and put on her pjs for movie night at Blake’s house down the street.  Jon and I got to head to a neighborhood party while Maria and Mario went to Blake’s house.  You would have thought she was going to meet Scooby Doo.  She jumped up and down in excitement waiting for Mario to get ready.  She gathered her popcorn containers, popcorn, and slippers.  We arrived at Blake’s house, and he showed off the popcorn and M&Ms waiting for Maria and Mario.  M & M had died and went to heaven.  They didn’t even notice us leave.

When we returned a few hours later, M & M were going strong.  Mario had been playing hockey with Blake for the last 20 minutes and Maria and Jonera (another little girl down the street) had been reading princess stories.  They were in no mood to leave but eventually gave in and sauntered out the door with Jon and me.  Maria went to bed within fifteen minutes of getting home.  Mario, on the other hand, stayed up for another hour playing up in her room, his room, and sneaking downstairs to talk to Jon and me.  The boy has too much energy.  We finally put our feet down and told him to go to sleep.  When we walked upstairs an hour later, he was snuggled up, as always, to his big sis – both of them snoring away.