I planned a trip to Cincinnati with the kids for the entire weekend because Jon was heading to England Saturday morning. However, his trip got delayed so he informed me he’d be home all weekend. Lucky dog, I thought. But he really wanted me and the kids to stick around so I compromised and took the kids to Cincy after Mario’s game on Saturday and decided we’d come back Saturday night.

Mario is doing better and better with football. I think the key is to have Jon present; he likes impressing his dad and routinely looks over to Jon after a play and gives a “thumbs up” to him. He’s been running after the other players more and even dodged another player while running with the ball for his team. I must agree with one parent who mentioned to me “he will be really good next year with this practice.” 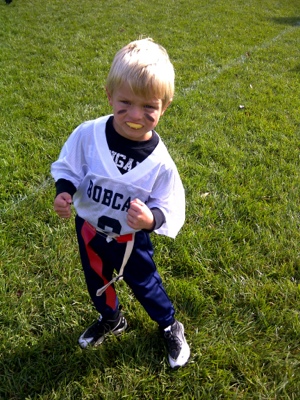 After the game, we headed down south with our popcorn, cheese pretzels, and powerades. Oh, and with National Geographic’s Wild Kratts show. Mario has been waiting patiently for it to arrive from another library and it was worth the wait. It had the Alaskan bears that Mario asked about every time a new show came on tv. Very cool.

Our trip to Cincy was like most other day trips down there. My mom and her husband describe it as a tornado coming through the house. Pretty accurate. My Aunt Julie, who lives across the driveway in the condo complex would likely describe it the same. The kids jump out of the cars, surprise mom and Rod, play with Lou and run over to Julie’s to say hi to her and Gracie and Liz and Maggie. It’s a cousin-fest! We break out the chips and candies and play with toys and make lots of noise. We tickle Gracie and pounce on Liz and Mag and act crazy. After that gets old, we head outside and show off our bike riding and toss the bouncey ball. Within a few minutes, we are ready for the park. Gracie gets in the stroller, Maria and Mario get on their bikes and we head north to the park where cousin Laura meets up with us. She swings Maria and Grace while I play with Mario and mom walks Lou. The kids put on a show for us that I want to kick myself for not recording. Of course, Maria emcees it and Mario and Grace do funny dances and songs.

After the play, we moved onto the main playground where Maria decided to take an eight foot fall off the slide. I knew she was hurt when I picked her up and she cried incessantly. She brushes off most falls but this one hurt. We carried her to the “ambulance” (Laura’s car) and transported her back to my mom’s. The only thing that would help calm Ri’s pain was Larosa’s spaghetti and meatballs so we ordered from there. I devoured a veggie pizza, and the kids ate garlic bread, pizza and spaghetti. We had worked up an appetite.

After Larosa’s, we hit the outdoors again for some cheer leading lessons from Ri who may be the world’s strictest coach ever. She showed me a cheer and then I tried it. She looked at me with sheer disgust. “Oh, Mary, that was not good….” So much for a gentle touch! Meanwhile, Mario and Laura threw the ball up on the carport roof and watched it bounce down. Mario thought it was the coolest activity ever but he could not get it up to the roof like Laura. It would bounce under the carport and over the small fence behind the cars and we’d spend ten minutes looking for it acting like it was lost treasure when we found it! Mario finally bounced it up to the roof and his smile was as wide as it was long when he turned to me. “I did it,Mom!” 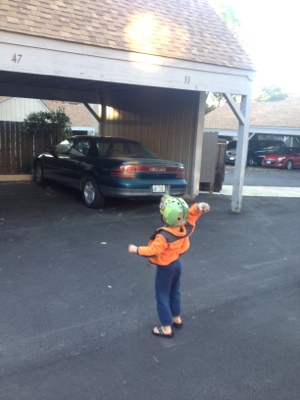 Laura took off for Oktoberfest and we headed inside for baths. The water looked like the Olentangy when the bath ended. The kids both wore goggles and laid parallel to one another to see who could hold their breath the longest. What a sight to behold. Two white round butts in the air attached to two tanned still bodies trying to beat each other in under water breath holding. Mom and I stood over them in awe and joy. They’d come a long way since the nights of bottles and binkies and crying at 2 am.

We ended the night with ice cream and the Dog Whisperer. Maria sat mesmerized by the show while Mario concentrated on making letters with marbles. We looked down and he had spelled “Rex.” He is a Ben Ten fanatic.
We dragged ourselves out to the car, got situated with a movie, and started our journey back home to Jon.

The tornado struck Cincy again but the destruction was well worth it, as always.