We got our Ri back today and it was so marvelous to have her running around the house. Our first activity was sled riding on Wyman Woods hill. It was quite a taxing event for Ri and me. We didn’t have any traction on our boots ( we wore rain boots) and the hill was icy in more places than not. We literally had to crawl up to the top of the hill from mid-way up because of the ice. People were laughing really hard at our expense. Meanwhile, Mario just cranked it up the hill without us and sped down on an old-school wooden sled that his friend brought to the park. Maria and I broke his red plastic slide within five minutes of arriving at the park when we tried to go down on it together. It cracked in 10 pieces and my bottom was soaked from Ri using me as her sled the rest of the way down the hill.

Ri was not as big of a fan of the sled-riding as Mario. She was nervous heading down the hill and tried to stop herself by putting out her hands and legs and then flipping over on her stomach and jumping off her slide half way down the hill. When she did go down properly, she liked it by the end of the slide but she had no desire to do it more than twice. She was much more happier making snow angels.

Mario finally joined us after his friend left and proceeded to bombard us with snowballs. He even managed to get one down my pants, the bum. 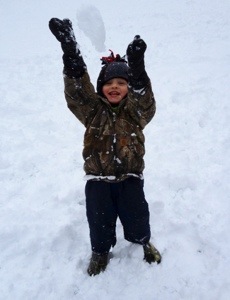 The kids played around in the snow a bit and then it hit them that they were freezing. They whined all the way to the car. Once home, they tore off their clothes and got in warm ones and we took down the tree. Yes, I am Scrooge as Jon says. Ri helped me take it down while Mario dropped pieces of an ornament that slipped out of my grasp to see how many more pieces he could see shatter. I did make him watch out not to step on the broken pieces….

They eventually got bored with that activity and decided to massage each other on our cushion in the front room. Maria belted out orders to Mario: “Massage my back, go higher, get my arm, now my head….” Mario smartly decided to charge her $20 and then she decided to leave the massage joint.

We got outside before the evening set in and built a snowman. Ri and I actually built it while Mario threw snowballs with Jon. Quite impressive snowman compared to our past attempts. 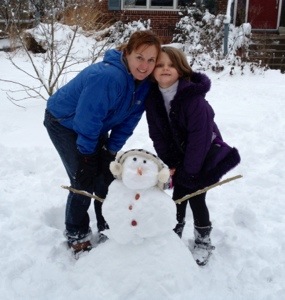 After freezing ourselves again, we headed in for warmth. I decided to pull out Maria’s homework with the hopes I could get her excited about it. Somehow, by the grace of a higher being, she didn’t complain and even turned the page after doing the first set of problems. I wanted to set off fireworks.

We got stuck on one question involving a trapezoid and three triangles. It asked what traditional shape the four shapes could make. Jon and I thought about it and drew some things but couldn’t get anything. We were thinking triangle or square…. So Ri and I called in reinforcements – Peepaw and Mama Meg . We gave the scenario to Peepaw and he immediately thought that the shape would be a parallelogram. At the same time he told Ri that, I had drawn a parallelogram. Us Menkedicks are always on the same wave length. We texted the shapes to Peepaw and Mama Meg to see if they thought we were right, and Meg also came up with a hexagon. We are set! 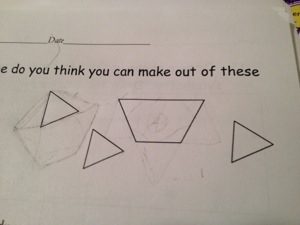 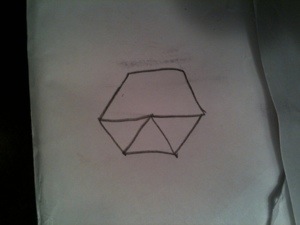