A park called out our name. We tend to defer to Darby Creek Metro Park so I wanted something different. None of the other metro parks had any special programs going on though and that was the extra push I needed to drive a bit farther. So we ended up at Park of the Roses.

The park is only about fifteen minutes away but I had only been there once with Ri and a girlfriend and her baby. Anything outside of walking or biking distance is typically a no-go for me. But it was such an abnormal day with 60 degree temperatures in mid-January that I figured it warranted an abnormal departure from all things Grandview.

We found a trail alongside a creek. Dogs splashed in the creek while their owners playfully threw sticks for them to fetch. Squirrels nestled in the low-lying branches nibbling on acorns. The water gurgled down a cascading waterfall. Yeah, just the scene I needed to rest after a crazy work week.

And then Maria accidentally hit the dog owner with a stick as she tried to throw it to the dog. Mario got wiped out by another dog too excited to see Mario in his way as he dove in the water looking like Super Dog minus the cape. A little chaos to mix into the serenity of the day.

But isn’t that how it always is with kids? How boring it would have been to walk the trail in solitude and listened to the birds sing their weekend melody. Come on, I need a little action interspersed through my walk.

And so, after the stick throwing and dog collision, the kids took off their shoes and waded in the cold, Winter aqua. They could not have been happier. 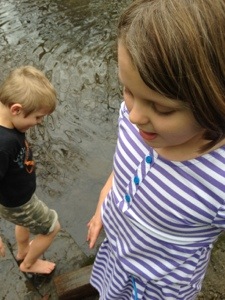 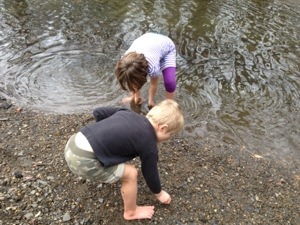 They were like the pups pouncing and splashing in the water. Tongues out. Smiles wide. They traversed the “waterfall” so excited to make it to the other side. They had spotted a Five Hour Energy bottle on the other side and were determined to get it for me (ever since I drank one months ago, they forever associate it with me and whenever I tell them I’m tired, I know just what they will look for). Maria grabbed it and it was empty. She looked dejected but Mario chimed in “at least you can look at it and just doing that should give you some energy.” My Little Buddha.

They found shiny rocks, “gold” rocks, pimpled rocks, baby rocks. They found slate similar to what they’ve seen at Peepaw’s and Mama Meg’s. They skipped flat rocks. Maria skipped one with Mario’s coaching (“Ri, watch me. I’m really good because Peepaw taught me when I was really tiny.”). It was glorious and messy and full of falling danger.

Then Mario took us up a hill for a “hard hike – one that typically only men can do.” After Ri and I gave him a piece of our minds about that comment and heard him say “girls can do anything boys can do” did we agree to the hike (I swear I should have listened to Marlo Thomas’ Free To Be You and Me more often when Mario was in womb; I listened to it incessantly with Ri). We slid and dug our nails into mud. We grabbed onto each other’s legs and pulled each other down into the wet earth. We clung to rope vines. It was an adventure and wonderful not to care about muddy clothes or wet shoes (I did make sure I wore old shoes due to my anal retentiveness about clean gym shoes).

With our feet soaked and our bodies layered in mud, we decided to head out and hit the Animal Shelter. The dogs and cats wouldn’t mind dirty kids. Mario asked Ri to hold him when I declined, and she exuberantly obliged. 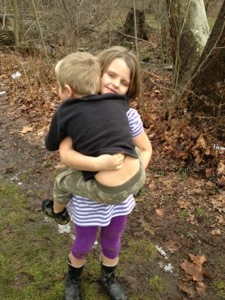 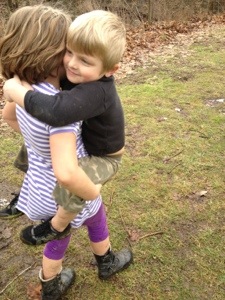 Happy as bugs in a rug. These trips make me squeal with delight.