Biking up to the Annual Cake Walk was bad luck. How were we going to carry a cake home if we won?

The Middle School gym was packed with no ability to avoid touching another human (Jon would have been very unhappy). I am usually ok in those situations for a brief period of time but then I reach a rapid breaking point and need out quick. There were the parents who loved every second of the event watching the crowd and chatting with other parents.  Then there were the seriously irked parents in the crowd silently bemoaning their children for making them endure such conditions. I was in-between.  This was the first year that I felt comfortable allowing Ri to leave my sight and run around by herself or with friends. And thank god I did because there was no way to let her walk ahead and still keep an eye on her. Ten feet ahead and she was in the masses. Mario wished he was Ri and could be on his own. He is so over having to be next to me and not run around on his own. Luckily, there was a toy/game area cordoned off upstairs so I could stand back and let him do his thing  (inevitably he’d run back to me though and say “Mom, come watch me play!” (he needs me more than he thinks)). Mario found Quinn and followed him everywhere. He’s got a complete boy crush on him. Ri hung with Sophie.

We failed on the cake front. Mario got so mad after our first loss that he pronounced “this is stupid, I’m never playing again!” Mario is intolerant of games of chance. He played a few more times and got irritated at losing every time.  Ri could have cared less; she was busy bragging about how Uncle Jack played in the band at the Cake Walk when he was in middle school. I love this picture of us: I was stunned because I almost won; Mario was mad because he didn’t; and Ri was zoning out due to a sugar overdose. 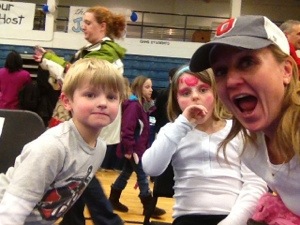 Saturday brought 40 degree weather which meant we were on our bikes and trolling the neighborhood. We hit Panera with Jon (Mario ate his entire ham sandwich – miracle!) and trekked over to our old digs to see if our bird’s nest was still up in the corner of the neighbor’s house. It was! But we found no mama sitting on eggs. Maria again lamented like she always does about the new owner not taking care of our old house. “He doesn’t care for it like we did. He doesn’t even plant flowers.” I’m worried if he ever comes outside, she may give him a piece of her mind. We stopped at Doris and Kim’s house to say hi but they weren’t home. The kids wanted a sad picture to send them so they’d know we missed them. 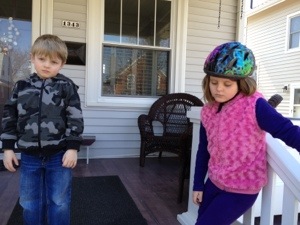 But then our always joyful Ri chirped “Now turn those frowns upside down, folks! Unfortunately, her stranglehold on Mario produced a greater frown. 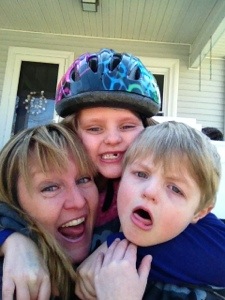 Next, we hit Zach’s house. They were preparing for Grace’s birthday party so we helped fill the piñata and broke out SpongeBob tattoos (we know how to party). Zach let M&M ride his go-cart which thrilled Mario. He also played b-ball with him. Mario is gonna love making boy friends at Stevenson. Meanwhile, Ri threw on Zach’s football pads and completely played the role of linebacker. 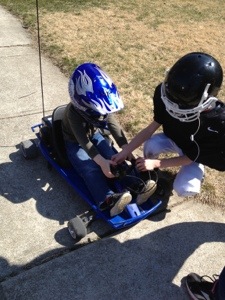 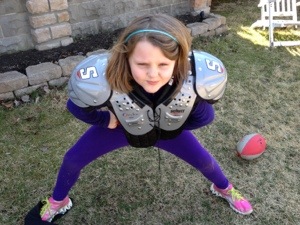 We left Zach’s and headed up to Kroger’s for eggs. We had our Paas coloring kits already. The kids engaged in their annual egg coloring doing better this year than in any year past (usually there is at least one colored water spill). After coloring 20 eggs we called it a night. Ri read Martin Luther King Jr.’s book to us before bed.  The book contained his “I Have a Dream” speech. Mario paid no attention to which Ri scolded “you are never going to learn about history, Mario!”

We skipped out on the farm on Sunday due to the Winter Storm predicted for the day (ended up to be a false alarm with hardly any snow through the day – daggone meteorologists. Mario jumped on me at 7:30 in the morning begging to color more eggs. So there we were at 8 am coloring away. 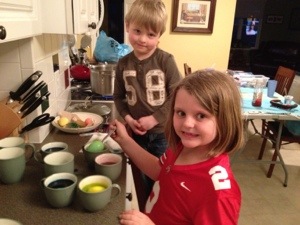 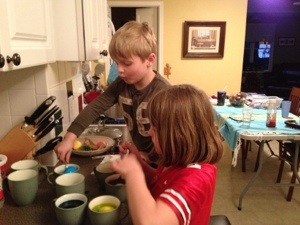 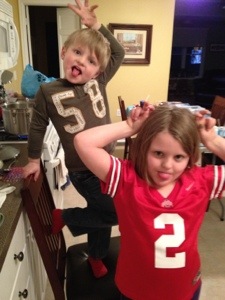 Ri went to Yoga with me at 10am. She loves playing on the iPad and watching me sweat. She is at once in awe and disgusted. We came home and found Mario in heaven because he was playing with Quinn. Ri and I took off to Stauf’s for a scone and Uno and then picked up Sophie and Paxton to head to the woods. Nothin’ like a girl climbing a tree in cowgirl boots. 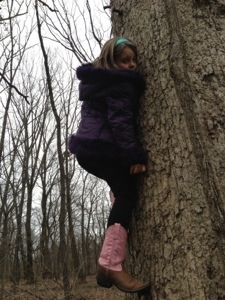 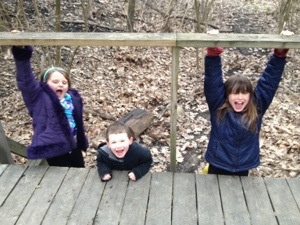 After climbing trees and playing in the shallow creek, we called it a day and went home. Quinn and Mario were playing mutant ninja turtles in the basement and eating peanut butter and Ri and Sophie took sleeping bags to her house to sleep outside in the snow.  When Quinn had to leave, Mario gave him a big hug and told him that they would play again tomorrow “because we’re best friends.” When Jon questioned Mario about Gio being his best friend, Mario told him “it’s complicated, dad, let’s not go there.”

We ended the night with a family card game of Three Little Pigs and Beat the Parents.  The kids demolished us.  We blamed it on being tired but I think it’s more likely a lack of sugar from no cake.