Ri and I were short-term celebrities Memorial Day weekend when we got to walk in the Grandview parade. It took mad running around to find a truck for my girls to ride in Saturday morning but I found one and the girls had a blast throwing candy to folks lining the street. I had them whooping up “Go Reds” at every turn. And, we got a surprise visit from Grandma Lolo. She came up for Ri’s first game and joined in the parade with us.

Once we got to the field, the girls lined up and ran around the bases as their names were called. Half were charged up and the other half were scared too death (Ri was in the former, of course). Then mom and daughter got photographed by paparazzi.

Maria went three for three in our first game. I was so excited for her! Jon and I were worried that she’d strike out and get all melancholy about softball (like she did in practice) but she cranked it (and then started to get cocky saying “the other team doesn’t hit that well…”). It was a blast watching the girls hit and go around the bases so elated to have actually hit the ball.

Mario rooted on his sis and when I asked what his favorite part of the day was he said “seeing Ria in the parade.” Darling.

Mom blessed us with gorgeous ceramic mushrooms for our yard when we got home from the game. I love walking out to them every morning. It was so nice having her experience the chaos of the game with us! 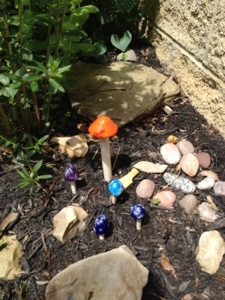 Mom left in the afternoon and Jon’s kin drove up. We had his parents and brothers and niece over for a cookout. Ri is all about family – always has been. When I told the neighbor kids they could stop over in the evening, she scolded me “Mom, we have family over in the evening – we can’t have friends over, too!” She likes her family time. Patty made her potato salad and her chocolate truffle for the cookout. Double trouble. I will be wearing sweatpants for the next month.

By the time the family left at 9:45, I was dead to the world. My body was exhausted in so many ways and I could barely make it upstairs to bed. So what did we do on Sunday? Headed to the zoo with the neighbors! Why not just make it a completely insane weekend?!
However, I got to talk with Stephanie, another adult, while the kids played and that was a welcome activity. 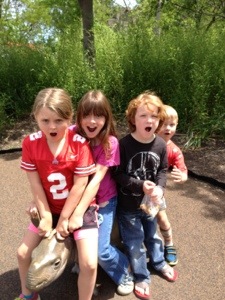 I think we saw a total of eight animals during the time we were there because we had to stop at each statute and play on it. But it wore them out so we dealt with it just fine. It is so wonderful to have kids three houses down the street that get along so great with Ri and Mario. They will be spending a large chunk of the Summer together, Zi am sure.

By Monday evening, Jon and I were spent. Ri had another game on Monday afternoon and Jon got just as involved as I did as coach. We left the game, had two of Ri’s friends over and hosted the neighbor kids for Mario. I told Ri and Mario that dad and I better be sainted for all we do for them.

They both rolled their eyes … but then jumped on us with big hugs. They know.