Maria did it up right on her last day of school – she rode her scooter in her white sundress and pink chain necklace, and stopped by Stauf’s for a blueberry scone for breakfast.

It was definitely a bittersweet day for Ri. She loved her teacher this year, Mrs. Palmer. Mrs. Palmer is a hip, conscious, progressive, intelligent, technology savvy, non-conformist teacher. Her classroom doesn’t have the traditional tables and chairs; it has bean bags and funky chairs and rugs. She teaches a large portion of her class by computer – all of her second graders, including Ri, created and maintained their own blog during the year. She was great for Maria.

Mrs. Palmer made a tile plaque for each child as an end-of-the-year present. She told me she cried as she read it to Ri. I cried when I read it, too. So thoughtful and further evidence that she is wonderful. She really captured Ri’s qualities, especially that she finds such joy in the ordinary which will make her life experiences all the more extraordinary.

And then there was Mario’s graduation. Ri gave up a birthday party to go to it (“How can I miss Mario’s big day, mom?!”). Mario already felt “above” his friends when he marched into school. After all, he’d been out of preschool for a whole week since David began babysitting; all of his friends were still “stuck there” as Mario told us over and over.

His teachers made him a graduation cap that he was quick to scrutinize and determine was too big (it fit just right to me). They tightened it but then it was too small. I finally had to make two more adjustments before he was content (his teachers won’t miss that, I am sure).

He walked in the muscle room with his class and waited for his name to be called. He received a certificate from his teachers and was polite and darling on the stand (I was hoping he’d break out in Gangum Style!).

Patty and Joe came down for his graduation, and while he was waiting for his name to be called he kept begging to go home with them for the weekend. Do you think he got that wish?

Of course he did. And then he became a super-happy graduate! 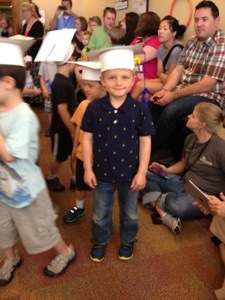