Mario’s buddies came over this weekend. They wanted to play Legos or build a fort. But Mario had a different idea.

At one point during crunches, Quinn started whining “this hurts my belly so much!”

I see personal training in his future. Of course, it will have to be training the stars cuz he will want some publicity. Remember how he punched out his bedroom window with the hopes of getting on Channel 4 news? 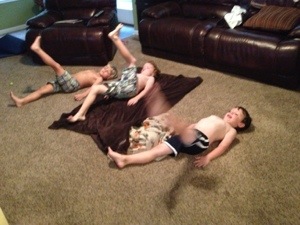 After their intense ten minute workout, Mario hopped up and pleaded for some food. “We need to put energy back into our bodies after that workout!” I was impressed since he usually eats nothing. The only problem was he wanted donuts instead of steak. We compromised on spaghetti with lots of garlic bread. I have a feeling we will see a 180 degree turn in a few years related to his eating, especially if he continues to workout like a maniac. I think he gets it honestly….