Maria has been dying to host a birthday party for Rocco who turned 1 on July 19. We sat at Stauf’s on Sunday and looked at dog party ideas on Pintrest. At one point she found a dog party company that “brings magic shows to dogs in your own home.” She was cracking up at the thought. I swear the girl could be my 40 year old girlfriend with the way she makes fun of these things with me. She’s a nut.

We ended up buying a ton of doggy bakery treats and tennis balls to stuff in doggy bags for Rocco’s guests.
Tuesday was an insane work day. The party was slotted for 7 pm. It ended up that only one other puppy friend could make the party. Poor Rocco had to feel deflated….
Maria and her friend Kathryn worked tirelessly after Girl Scout camp to put together decorations and create party games. I got home right at 7 pm to find a table decorated on the deck with dog treats and streamers. They had a pin the tail on the dog game set up. Precious. Kathryn’s mom arrived with Hannah, a golden doodle pup. Rocco was his clumsy, goofy self hopping on Hannah and sniffing all over her. But she sang happy birthday with us and she made Rocco happy.
> 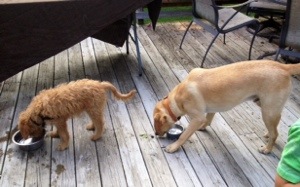 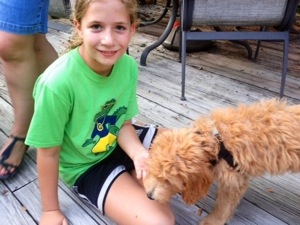 After the pups went to town on dog treats and cupcakes, the humans got to play games and win prizes. Mario won pin the tail on the dog.
> 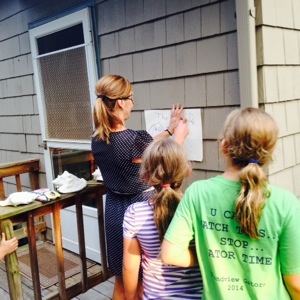 He graciously allowed Elizabeth and I to have the prizes – lotion and nail polish. We then played a guessing game and called it a night. It was 8 pm by that time and I was exhausted after a long work day. Besides, I believe Rocco had been fed a doggy cupcake, three large bones and at least ten other treats by 8 pm and he was starting to look bloated. I should have been prepared for a night up with the pup when I looked at him that moment, but I was too exhausted to notice. I got the kids in the shower and prepared camp lunches. We all hit the sack at 10 pm. At 1 am, I heard Rocco whining. And so it started. Just like when the kids were babies, I was up every hour letting him outside to expel all of the treats from his stomach. I was a zombie when the kids came into my room at 6:20 am, and drank two energy shots to try to look alive through the day. The kids, on the other hand, sprang down stairs and were ready to roll out another day of camp. Even Rocco was running around like a crazy pup by morning time. So, birthday number 1 was a success. Rocco gorged himself. Mario won the games. Maria was very proud. And mom, as tired as I was, loved seeing everyone happy.
>