I’ve been beating myself up all week.

Mario experienced his first Boy Scout camp this week. It’s been a bit of a fiasco since we learned three days before camp that an adult needed to be with him at all times during the 8 am to 4 pm camp. Rack on another “crappy parent” notch to our belts since Jon and I could not take the entire week off to attend camp with him. That’s immediately how I looked at the situation. Jon is a little easier on us. His viewpoint is that we are working parents and we can’t do everything with our kids – we have a sitter that can do these things when we can’t. Real simple. I wish I could steal that gene that doesn’t harp on guilt.
But the problem arose that our sitter also has a two year old son who she tends to through the day along with Ri and Mario. Could we really expect her son to be good and stay by her side for 8 hours while she tended to Mario at camp? I spent the weekend trying to figure a way I could take off a day or two and Jon did the same. I also prepped our sitter about what may be in store for her and asked her to see if her parents could watch her son. I also convinced myself that Mario would probably dislike it any way and not want to go after Monday.

He loved it on Monday.

Jon was able to take him Monday morning, get him registered and acclimated and see him through some initial stations. Mario loved having him there. Our sitter arrived around 10:30 am and relieved him. Mario begged Jon to stay. He did not want our sitter’s son to stay (he’s been having a rough time with our sitter’s son all summer – it’s tough to go from being the youngest in the house to the middle child). But they survived until 4 pm. And he told me all the fun he had that night.
“But can you or dad stay all day tomorrow?”
Of course, the last two weeks have been reasonably calm and I could have gone in late to take Mario to camp. But this week was ridiculous with emergency matters left and right. I talked to Jon – who had to leave town at 5:30 pm Tuesday night – to see if he could take him again on Tuesday. He moved mountains but was able to do it. Mario was so happy. Jon stayed with him until lunch time. Our sitter relieved him at noon and that allowed her to only have to balance her son and Mario for four hours. A small victory. I had hoped to go out on Tuesday afternoon but could not break away from the chaos. It ate me up and pissed me off and I swore I’d get there Wednesday.
I pressured our sitter to find someone to watch her son on Wednesday so that she could be alone with Mario and give him complete attention. She was able to do so, which gave me a little sigh of relief. But I couldn’t make it over to the camp on Wednesday either due to the work madness. I didn’t get home until close to 11 pm that night and I stood at the kitchen counter eating ice cream from the package and staring off into space. I was tired and irritated and missing my kiddos. I walked upstairs to find Ri sprawled out on her bed like a teenager. I jumped on her and bear hugged her and kissed her cheeks and she laid as still as a sweet baby doll. I whispered a goodnight to Mario (who was staying with Patty) and went to bed.
Patty, aka our savior, took Mario to camp Thursday and Friday. What a godsend it was to me – to have peace of mind that he would be with her all day. She is close, if not at, the same level as Jon and I in Mario’s eyes. So he was in heaven at the thought of her attending.
But he did call me and ask if I could try to come so that I could watch him doing activities. That’s it, I thought, I gotta get up there if only for an hour. I struggled to get work done and got some help from my colleague in order to take off at 1 pm and head up to see Mario. I made sure to capture the look on his face as he walked up the path to greet me – pure joy and excitement. Damn, it feels good to be loved that intensely. I made it just in time to creek walk with him. Grandma joined, too. We learned about water creatures and clay rocks and crawfish. It was a wonderful time. 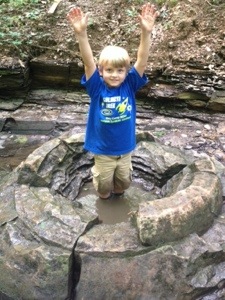 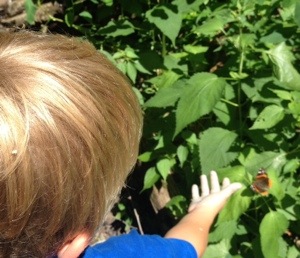 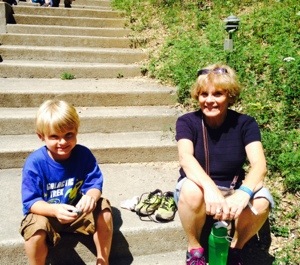 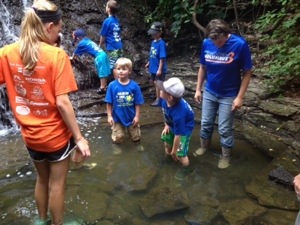 Mario held my hand and walked with me. He gave me kisses. He laughed. It was well worth the effort to get out there.
In the end, all my worry and angst was unnecessary. I couldn’t see that in the moment but after a Mama Mimi’s pizza and some UDF ice cream on Friday night, I could see that 15 years from now, whether our sitter went with him or I went with him, he would turn out fine.
I continue to face the fact that I cannot “have it all.” I cannot always be with the kids when I want. I can’t always produce the most stellar work. Life gets in the way. Emergencies arise. Appointments arise.

When I give myself the space to accept that, life looks pretty good.

I work in a fairly flexible job. Some weeks are insane and some are slow. I get a lot of kid time when weeks are slow. Unfortunately, Mario’s Boy Scout camp was during an insane one. But I tried my hardest to take care of Mario by getting my sitter to go without her son, by working with Jon to flex his schedule, by asking Patty to go a couple of days, and by finding the most opportune time to get out and see him myself.

I shouldn’t be beating myself up, I should be hugging myself.

I think in the end, it is the knowledge that you are loved that helps a kid blossom. Mario feels love from all directions – parents, sitters, grandparents. He will be just fine. And I will, too.
> 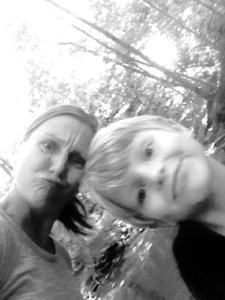