Another rip-roaring weekend last weekend. Moving non-stop but loving it because the weather was so amazing – crisp and sunny.
Ri had a sleepover with Sophie on Friday night. Jon reminded me she had soccer on Saturday morning and I expected when I told Ri that she’d have to go, she would pitch a fit. But I was pleasantly surprised by her reaction.
“Ok, mom.”
She’s really digging soccer. I cannot get over it. This is the girl who, for years, has been adamant that she does not want to play soccer.
“Too much running.”
This was always her response. Thank goodness for Henley deciding to play because that is the only reason Ri agreed to sign up – she was losing her friend during Mario’s football practice. Henley has a brother on the football team, too, so they’d play at the park while their brothers practiced. But then soccer started.
It was gradual love affair. At first, Ri would look at me on the sidelines and plead to come out of practice to get more water. Or she’d say her side hurt. But she never left practice saying she didn’t want to play anymore. And with more practices, she asked to come out less and less.
On the way to her game on Sunday, she proclaimed “I love soccer!”
I smiled so wide it felt like I could touch both ears with the sides of my mouth.

Ri and Mario had birthday parties on Saturday afternoon. Jon took Mario to his and I took Ri to hers. I love the girl who had the party – she chose gem mining at a local cave for her party activity. All the girls were talking about getting dirty and finding cool stones. Awesome.
>

I got myself a much-needed Yi’s Relaxation Station massage. 40 minutes for $40 and they go to town on you. Even so much as climbing on the massage table to walk on your back. Heaven. And chocolate bars to take home afterwards.
Patty and I picked up Ri from her party and headed to Hilliard for Mario’s last football game. They played under the lights at 7:30 pm. He was excited. Patrick and the kids came to watch, too. Very sweet. Mario and all of his teammates played so hard and ended up in a tie. It was a great season – Mario had so much fun and made friends with second and third graders, which helped so much at the beginning of school.
>

Meanwhile, Ri, Henley and Alana could have cared less about Mario or football. They spent the entire time on the jungle gym.
>

On Sunday, I got a long run in with the Rocco pup and then went Halloween shopping with Patty and the kids. That was at once hilarious and maddening. The kids look so precious and goofy in their costumes and masks they try on but it gets frustrating waiting for someone to help you determine whether they have the costume in your size and then trying the daggone thing on over clothes and shoes and kids who fuss and whine over the proper placement of the shoulder pads or sleeves (aka Mario).
> 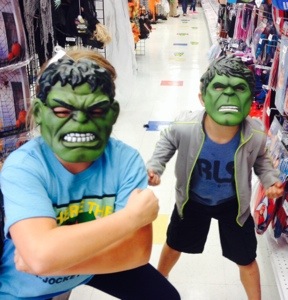 It’s also quite sad looking at the selection of costumes for girls. Boys have doctors in scrubs, Spider-Man, werewolves, firemen. Girls have nurses in skirts barely falling below the top of their behinds, wonder women in tight tank tops and belly shirts, and princesses in sleeveless chiffon. I love my girl who after looking at all of the outfits remarked: “I don’t like any of these. They are too pink and not scary at all.” We ended up in the boy section. This is the first one she tried.
>

Mario simply wanted anything that came with a horrible looking face and some type of weapon. That was nearly half of the costumes for his age.
; 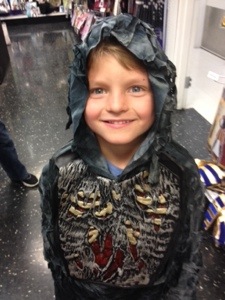 We finally arrived at a pirate costume for Ri and a grim reaper for Mario. And 10 Hershey kisses for the road.
Ri had a killer soccer game and we came home to steaks on the grill and twice baked potatoes thanks to Patty.
A weekend of spectaculars – spectacular weather, spectacular sports, spectacular family, and spectacular food.
>