Pure joy on Maria’s face. Ya know why? Three words…
Baby back ribs.
The girl is her father’s child. She adores ribs. They’ve never enticed me but Jon loves them.
We went down to Barley’s for kids eat free night with the Markle clan. I knew I’d have trouble getting Ri to eat off the kids menu – she’s been trying for those adult meals for the last few months. And Barley’s has nothing much she likes on the kids menu. That fact combined with the fact that Barley’s has ribs led to her non-stop pleading to me.
“Why don’t you get pulled chicken? That sounds good.”
“I don’t like that mom.”
“How about corn dogs. Mario’s getting those.”
“That’s all Mario ever gets, mom. I just want ribs.”
The waitress came over to get our order and I asked about the ribs. She told us that they come in half and full orders and there’s two kinds: those pulled from the side of the pig or those from the back of the pig. Just the thought made me cringe and I thought for sure Ri would shutter in disgust, after all, I had to stop reading Charlotte’s Web to her the other night because she was so sad the farmer was going to kill the little pig.

“I want the ribs from the side, mom.”

And I swear those ribs were devoured within fifteen minutes of being served. Along with a side of baked beans. 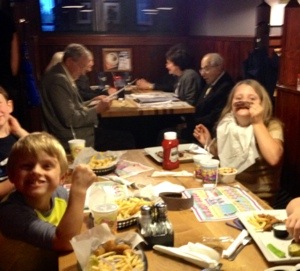