I finally walk among the living today. It has been three weeks of coughing, fevers, headaches, stomachaches, nausea, fatigue, and grouchiness and I am so ready for my world to revert back to healthy bodies and laughter and positive spirits!
First, Mario got sick before Thanksgiving. If I don’t get the sickness he carries, I still get run down because I end up staying up with him half the night. Even if he’s not calling out for me, I lay awake because I can’t stand to hear him coughing. It was that hoarse, gagging cough he had and it sent chills up my spine to hear him. I’d go into his room and make him blow his nose and give him water and then rub his back to settle him down. I’d reach a time when he wasn’t hacking and think “yes, he’s asleep and well.” Then I’d climb back into bed and within 30 seconds he’d start hacking again. I’d toss and turn as Jon snored away beside me. How can he sleep so soundly?! I’d sit in bed both worried about Mario and pissed at Jon for being able to sleep (to give Jon credit, as soon as I nudged him and told him to get Mario water, he would). The mother gene kicks in full throttle when our babies are sick. I can’t rest peacefully unless they are. And when I don’t get 7 hours of sleep, I go downhill. And so I did. The day after Thanksgiving, I began to feel crappy. And just when I began to feel a bit better, Rocco got sick. He had the same hoarse cough as Mario but with one difference. He had gotten into the bag of turkey bones. So, at 2 am when he was wrenching in his crate, and Jon was snoring away, I awoke. Those mama genes in high alert even for my non-human baby. Poor pup had thrown up everywhere and continuously gagged. I found no turkey bones in his puke (what a life) so became increasingly concerned that one was stuck in his throat. Jon came down and we agreed I should take him to the ER (I’m better at hospitals is Jon’s reasoning for not going). So at 3:15 am, me and my pup drove to OSU Vet Hospital. At least it wasn’t too busy. Lots of dollars later, they diagnosed him with kennel cough and pneumonia and told me I could keep him at the hospital for a boat load of money or take him home and watch over him all day. By this time (7:30 am), I was exhausted, sick, and distressed. I decided if stay home to rest and watch over Rocco. But Monday was the day that all hell broke out at work and I was on phone calls all morning and afternoon. As I left to go to Ri’s geography bee, Rocco threw up blood. Are you kidding?!
So, I ran to her bee, watched her kill it, and then ran home to take Rocco back to OSU. Another chunk of cash later, they confirmed no turkey bone. Still just the kennel cough and pneumonia. The blood must have been from all the coughing. I got a handful of different meds and headed home at 8:30 pm. Jon could see how tired I was and told me to go to bed with the kids. He stayed downstairs with Rocco. I fell asleep before the kids and slept until 4:30 am when Rocco came upstairs to heave beside my pillow. At least I got 7 hours of sleep. It’s all I needed to feel somewhat revived and at least be able to make it through most of the day before wanting to crash.
But then Ri got sick. She was at a concert at Mershon Auditorium when I got the text from a mom friend. She reported she was hot and pale and miserable. Ugh.
Jon was in a meeting so didn’t answer my call. I had a meeting at 1 that I couldn’t miss and it was 11:30. I called the doctor and got her in at 12:15. Tried Jon again.
Voicemail.
I scooped up my coat and keys and drove to Mershon. My girlfriend brought her outside and she laid in the back moaning about her head.
Jon called.
He would meet me at the doctor so I could get back for my 1 pm meeting. This constant juggling and meeting and exchanging and dropping off is the sign of a true partnership and of true love. Jon and I may not see rainbows and stars every time we look into each others’ eyes but we do see deep devotion and love. We see perseverance and dedication and mutual struggle and joy. I watched him and Ri talking as I left the doctor’s office and felt such affection for him. I also wanted to pass out from exhaustion.
Ri was sick all weekend and therefore, Jon and I and the kids just chilled around the house all day Saturday and Sunday playing board games and watching football. It was wonderful and much needed for the body and mind.
Here’s to this upcoming holiday season being free of bacteria and viruses and full of the warmth and love that, thankfully, so beautifully fills our home and keeps us among the living – even when we are completely exhausted. 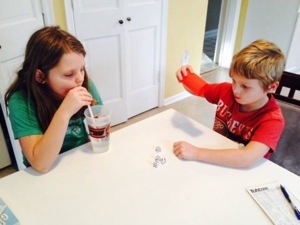