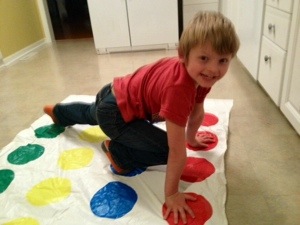 This boy is a human pretzel. He challenged me to a game of Twister before the OSU game on Saturday night and he whooped me. I thought I did pretty good – got my right leg on red while my left was on blue and my right hand was on yellow and left on red. But when he spun and told me to move my right leg, I collapsed. Don’t quite gave the agility I once had.
But Mario, he cranked the moves out. He was literally in a near back bend and held it as I slowly flicked the spinner to give him a new move. Eventually, I ditched the spinner and just began to yell out where to place his feet and hands, calling out positions that should be impossible. But he achieved them.
>

Eventually, after 20 minutes, he caved when he had to try to twist one leg under the other and his trembling arms were spread out the length of the plastic mat.
As he walked by me to sit with Jon, he commented “I only fell because I wanted to watch the game with dad.” I believe it.
Rascal.>