There are certain activities that the kids and I engage in only when Jon is away. Because if we engaged in the antics we did, he’d lose it. And with good reason. I tend to say “yes” way too much.
So when the kiddos asked if they could give Rocco a bath on Sunday, my default “yes” came out even though we don’t have a workable tub so the kids would have to use our shower. It was easy to say yes, however, because the entire downstairs smelled like wet dog. I could wash his blanket every day and it would still reek. And since I don’t wash it every day, and it’s been snowing or raining, and Rocco’s fur is matted from all of it, it’s doubly as gross. I called them when I was five minutes away and they were ready for me when I got home. I had signs on the steps and hallway saying “Dog Wash” with an arrow pointing towards the bedroom. I approached the bathroom and saw shampoos and conditioners strewn out along the floor and sink. Towels everywhere. And Ri and Mario standing in their swimsuits ready for Rocco. I couldn’t believe he stood in the shower with them calm as can be. And they went to town on him! 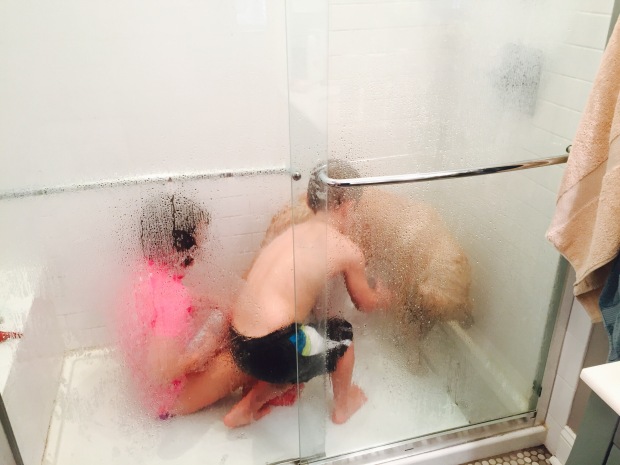 After a full on bath, they brushed him. He just stood there like a trooper. Best dog of the year.

They made a video as they washed him so they could try to sell their services to more dog owners. Ri was going to charge $2 a wash but Mario demanded $5. They posted the video on Facebook with the hopes of new customers. None yet. Probably best, dad is home soon.