Our weekends have been so full this Fall between sports that we have not been able to schedule any weekend outings. But Ri freed us up a bit with her soccer concussion – way to take one for team, Ri-bee! Now we have Saturdays free so we used the newfound freedom to head to Steeler country and visit Sarah, Jorge and sweet Elena for a couple of days.

I picked up the kids at noon on Friday, which absolutely made Mario’s day. He actually begged to not go to school at all Friday morning…. (I’m telling ya, I will not be surprised when he leaves us at age 15 for Hollywood – the latest place he wants to live). Ri was more excited at the thought of seeing Elena then getting out of school (unlike Mario she “loves school so much”). We hit I-70 with our bags of snacks and water bottles.

I loved the drive out to Pittsburgh because we talked nearly the entire trip. Ri gave us her vocabulary words and we thought up sentences for them. Mario looked at our Atlas book and decided he wanted to visit Australia. They read some. We geeked out at the “Welcome to West Virginia” sign and then the “Welcome to Pennsylvania” sign soon thereafter. Those moments boost me up more than any energy drink ever could.

We arrived to Pittsburgh traffic but – as Ri pointed out – not as bad of traffic as it could be. She’s been to Pittsburgh a handful of times but she knows the city like the back of her hand…. We finally hit our exit and waited at the light to turn up Poucousset Street. Ri observed that the intersection looked like an intersection in Oaxaca with the painted mural on the stone wall, the gas station and the one-story stone building. Gotta love this perceptive girl.

We arrived at Sarah’s house with the kids fighting over who got to present Elena with her Frozen book. Ri gave in to Mario and let him present it to her. Sarah opened the front door holding Elena in her arms. The kids yelled surprise and Elena made a hilarious “O” face and held out her hand like an officer directing traffic. She is a card! She immediately jumped down and played with the kids. Within five minutes, she was directing Ri and Mario to jump on the bed with her. 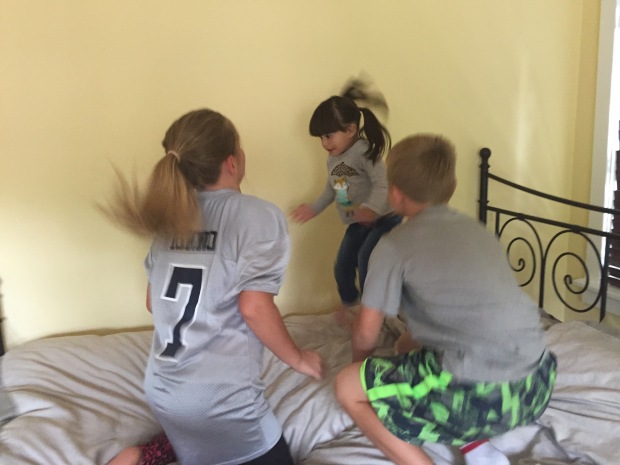 Mario couldn’t wait to go to the park and try out the cement slide. He had heard about it from Ri when she went to Pittsburgh and it sounded awesome. The rain was heading towards the city so we loaded up the kids and drove to Frick Park. The slide did not disappoint. 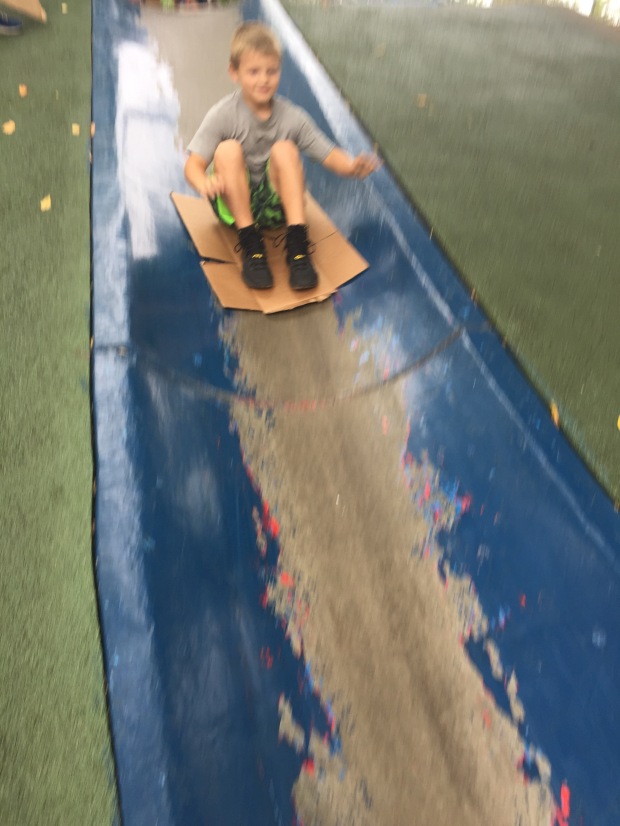 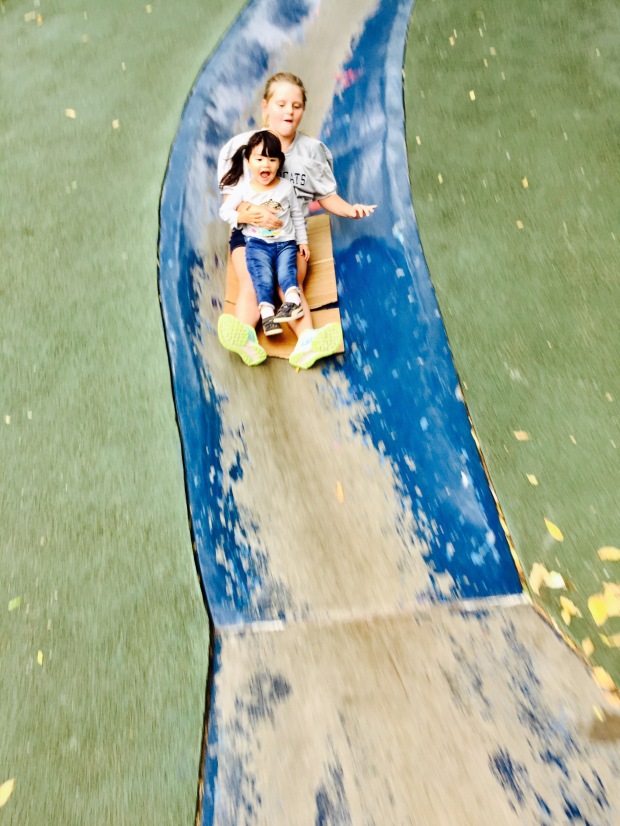 Elena loves the rolling hills at the park so she held our hands and led us in their direction. The kids ran down the hill in a scene reminiscent of Little House on the Prarie, minus the face plants. Elena likes to act like she’s sleeping and Ri has to wake her up. She also likes to climb on Ri and Mario’s backs. Oh, and she loves to eat grass, much to Sarah’s irritation. 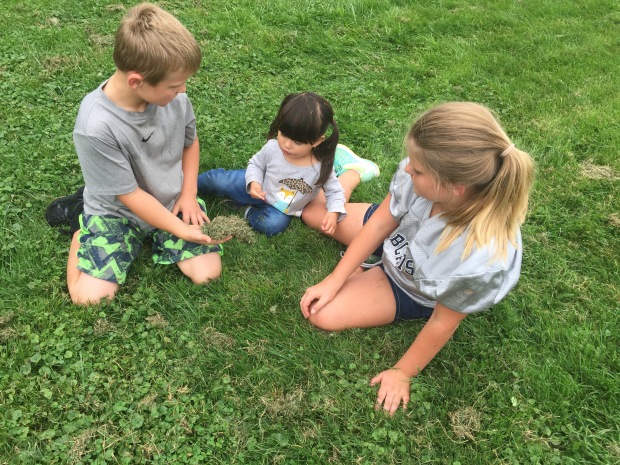 As it started to sprinkle harder, we decided to pack it up and hit the hotel pool for some swimming action. We all could have eaten Elena up in her swimsuit and floaties. 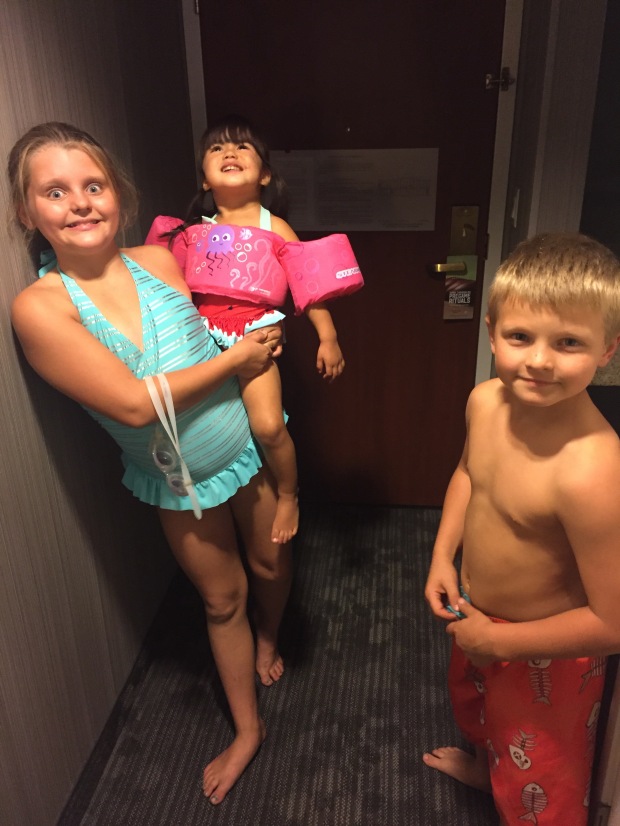 The hotel pool seemed minuscule compared to our visit four years ago. And they got rid of the hot tub! The hot tub is Maria’s and Mario’s favorite.

The pool was freezing when we jumped in and sweet Elena was shivering within ten minutes. We lasted about 30 minutes altogether – the kids got to act out lines as they jumped in the pool and Elena loved watching Ri do cannonballs.

We got dressed and you guessed it – we headed out for another adventure. This time to the Union of Pig and Chicken. They serve southern goodness – baked beans, collard greens, brisket, corn bread. Ri was all up for it; Mario, aka “picky eater” was not. He ordered plain nachos. While he ate those, we could not get enough of our food. Delicious! 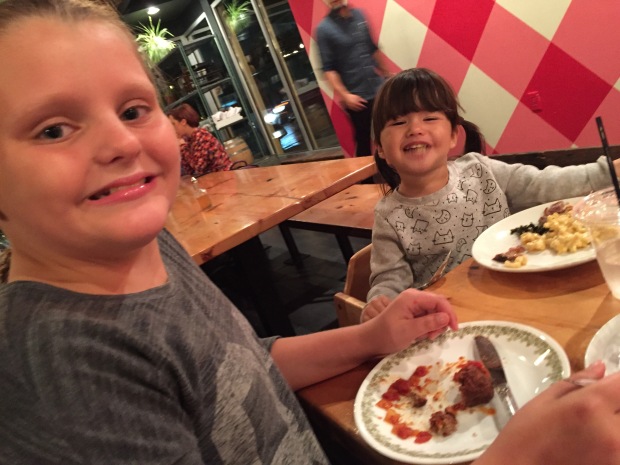 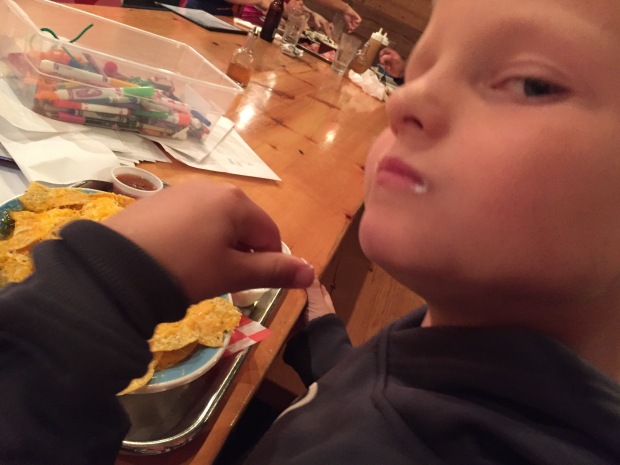 We could not fathom dessert after that spread so we dropped off Elena and Sarah at their house and headed back to the hotel to watch some cheesy Nickolodeon movie and lay in our pjs. We did end up getting ice cream bars and KitKats later in the evening, however….

Mario woke up at 6:30 am Saturday morning. I purposely drew the heavy curtains with the hope the darkness would keep him sleeping. No luck. He is a night owl and an early morning bird! I made him lay with me until 7:15 am and then Ri woke. I thought for sure they’d want to go to the pool but they had no desire. They just wanted to see Elena. I called Sarah at 8 am and for once Elena was still sleeping! We wore that girl out. To our glee, by the time we got packed up, checked out and got Starbucks, she had awaken and was ready to see us.

We pretty much hopped right back in the car as soon as we arrived and headed 40 minutes outside of Pittsburgh to a pumpkin patch. It was still sprinkling outside as we drove. We kept hoping it would stop and clear up. Meg and dad met us at the patch and informed us we just missed a massive downpour before we arrived. I guess a few sprinkles is nothing compared to a downpour. Dad probably just said that so we’d keep the sprinkles in perspective….

The clan headed straight to the corn maze. Mario and Maria darted into the entrance and loved trying to find their way around. I have never been a big fan of corn mazes; they freak me out. But the kids love them and Elena seemed to love it, also. At the end of the maze, they had a sledgehammer game where you try to hit the ball to reach the bell at the top. It looked a lot easier than it was, I can say that much. Mario tried with all of his might to get it up to the top. He accomplished the feat on the miniature one! 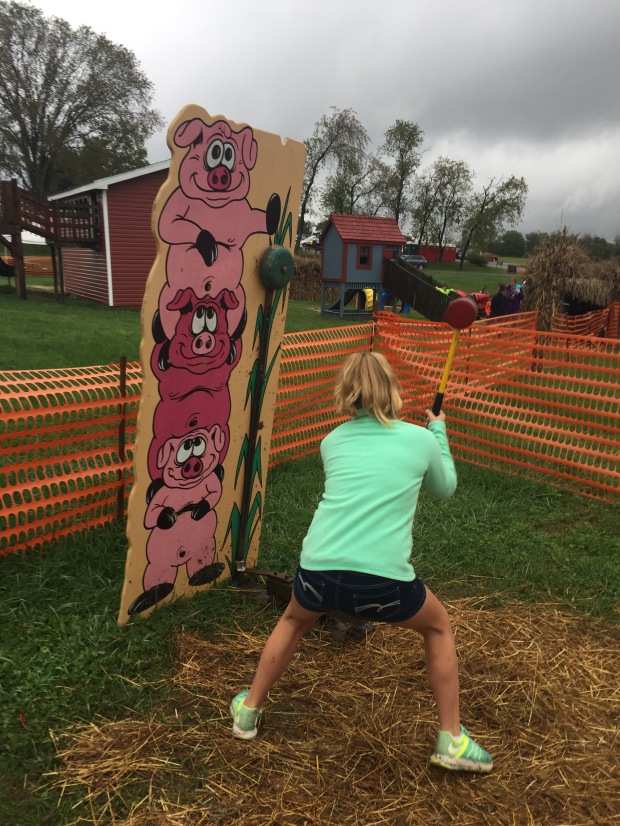 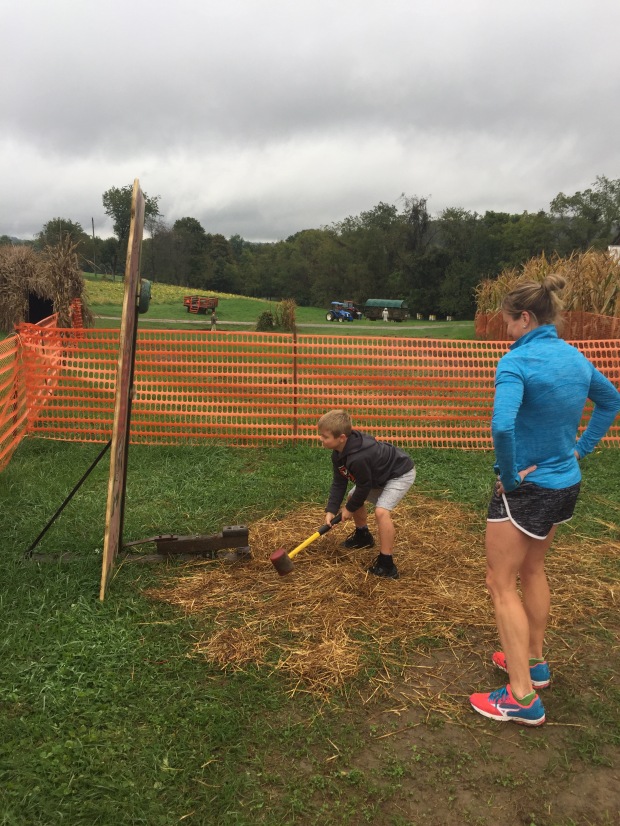 They had a slingshot area where you tried to shoot a tennis ball at a target. Mario got quite a few at the first target; Jorge and I cracked up at our attempts at the farther target.

They also had a tube slide and inflatables. Elena loved the kiddie inflatable but she wanted Maria in it with her the entire time. Mario loved racing Ri and I in the other inflatable – he won by ten seconds each race. Ugh! They also had a petting zoo and lots of animals to see, including little chicks and a piggy. My favorite! It was Elena’s favorite as well.

Our last activity was the hay ride to find pumpkins. We found Elena a tiny  pumpkin as we looked for the most perfect colored and shaped pumpkin in the patch to put on our porches. I loved a white squat one but another person grabbed it. Mario nabbed a pretty bright orange one with a curved stem. Maria ended up with a monster of a pumpkin weighing 32 pounds! I got a multicolored one – green and orange. We all walked away happy.

The rest of the gang was ready to call it a day four hours after we had arrived but the kids and I decided we needed one more round of pig watching and haunted house viewing, and we still needed to go apple picking. We kissed our gang  goodbye and headed up to see our pig. Then we went to the haunted house, and ended the day picking golden delicious and gala apples from the orchard. I figured we’d head home from the pumpkin patch but the kids wanted to see Elena one more time.

So we loaded ourselves into the car and headed back to Sarah’s house. Are you tired yet?! We scooped up Elena and took her to the park while Sarah took a run. In typical Mary style, I allowed Elena to play in the mud and get her hands full of it. In typical Maria style, she joined in the mud-fest and got it all over her. In typical Mario style, he stayed far away and was repulsed. I was cracking up. But I knew better they to let Sarah see Elena with mud-filled hands so we darted to the water fountain and cleaned her off before Sarah ended her run. There was no way to clean Ri but Sarah wasn’t surprised that she was full of dirt!

After the park, the kids wanted to take Elena to target to look at toys. Yes, we hopped in the car for one last trip. The kids were fascinated with Target because it had a parking garage and an escalator. Hilarious. We got Elena a new fall outfit and played with toys in the toy aisle. Yes, all Frozan items….

We bought some nutritious Lunchables for the ride home and packed back into the car to head to Sarah’s house. I packed up my car with our goodies while Ri and Mario gave kisses to Elena and told her they loved her. We packed ourselves into the car with pumpkins by our sides and Lunchables in laps. Earlier, my key had gotten stuck in my car so I had to park it at the top of Sarah’s narrow driveway to avoid someone stealing it. I reversed the car in the dark trying to see behind me. As soon as I merged in between the two houses, I thought to myself “watch the side view mirrors.” I might as well have willed me to hit one against the brick wall. CRUNCH!

I let out a few choice words only to hear Maria whisper up to me “it could be worse mom, you could have gotten in a huge wreck.” That’s my girl. Perspective. After all, I could still see out of the side mirror through all the cracks.

Jorge and Elena came our to check on us and after laughing about the craziness of it all, I drove off into the Pittsburgh night with the kids watching Spellbound and devouring their ham and crackers.