Ri and Mario spent the entire weekend in sleepovers with their friends. Friday night, Ri and Mario headed up to the football game tailgate with Jon. They arrive an hour early to party it up with the rest of the parents parked in the lot by the field. Ri chatted it up with Jon’s friends and ate the unending line of dips while Mario threw the football with his buddies.

I made it up in the second half (after letting go of the week’s work and taking my pup for a walk in the woods). When I arrived, Ri and Evelyn were already asking for a sleepover. Mario and Zach had already gotten approval from their dads for one at Zach’s house. I agreed and we decided to leave the game to head to Choclate Cafe for a late night snack. As I cleaned up the kitchen, the girls primped up for the Cafe. I had no clue that’s what they were doing and when they came down, I was caught by surprise. They really need to not dress up because they look like high schoolers and it makes me cringe!

We enjoyed caramel truffles and milkshakes at 10 pm. Meanwhile, the boys played some serious x box at Zach’s house.

On Saturday, the girls humored me and walked to Stauf’s for breakfast. We sat outside with Rocco and played cards while eating our yummy muffins. Then we hit Target for dress shopping – the girls’ favorite activity. The boys went, too, in order to sucker me into buying them face masks for their Nerf battles. Mario brought up his previous two eye scratches and that’s all it took. I bought them. Ri found a dress after trying on three of them. Ev wanted her to get one with polka dots but RI’s style is much more subdued – plain black.

After Target, I took Ri to get her hair conditioned. A week ago, she mixed coconut oil and baking powder in her hair and it felt like hay. It looked awful and you couldn’t get a brush through it. She didn’t seem to care but it drove me nuts. It took two washes to get it clean but it finally looked normal again.

The girls had a b-day party on Saturday afternoon, and the boys wanted to hang out our house since we’ve got all the “bad food.” I agreed to take them for the night and our friends would take the girls. The boys begged me to take them to Get Air like I took the girls one evening a while back. But Zach is still recovering from a concussion so we couldn’t do trampolines. They decided on Galaxy Games and Golf for a round of putt-putt and some gym play. Little did they know that I am quite the putt-putter. I amazed them with my hole-in-one. Actually, I heard Mario whisper to Zach “my mom is really good.” Precious.

We walked inside after their crushing defeat and right in front of us was a claw machine – Mario’s addiction! He begged for coins to play. Again, sucker mom. It doesn’t help that I love those dang claw machines, too. Mario, of course, immediately won a stuffed animal and a ball. It took Zach a few more tries but he nabbed an animal and a ball, too. In trying to get an animal, he nearly got a stuffed animal chicken. Mario was set on winning it because I was dumb enough to whisper “oh, I would have loved that chicken!” He’s gonna spend all his money on his dates trying to win them stuffed animals. He kept trying and trying but the chicken kept winning. I finally stepped in and asked if I could try it. I clawed the chicken and a random teddy bear – won two in one try! Can you sense my excitement still?! The boys were amazed again….

I had to put a stop on the claw games much to their dismay. They would have spent a fortune there if they could. We moved on to the gym, which was full of kids. I read my book and ate my snacks while looking up at Mario here and there when he shouted at me.

We stopped at McDonald’s on the way home for some delicious dinner and then turned on the Buckeyes game when we got home. They made their way to the reclining sofa and commented on every play of the game. Jon got home shortly after us and we all watched the game together. Mario fell asleep around 10 but Zach hung in with us until the end.

The next morning the boys and I walked to Stauf’s (two days in a row!). We ate bagels while playing cards and watching the marathoners. Heaven. Then we topped off the sleepover by heading to the woods for a Nerf gun battle. Rocco refused to leave Mario’s side. Alana and Patty were at the house when we returned.

Alana and Ri loved working the concession stand at Mario’s football game. They each made some cash from it.

Meanwhile, Mario and his teammates suffered their first loss of the season. They played hard with two of their stars out with injuries. I’ve never seen so many crying boys after the game. But they have next week to recover. 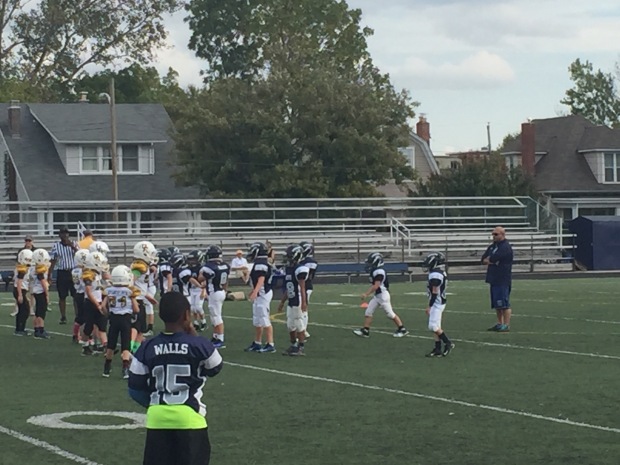 So there you have it – another non-stop weekend with friends and parties galore. It’s a new kind of busy from the days of toddler-hood but I love it all the same.