Jon came through for Maria tonight.  Maria gets to participate in “crazy hat” day tomorrow at horse camp and she has been fretting about not having a crazy hat.  I had hoped to get to the store today to find something for her or come home from work and help her make something but neither happened since I got stuck in negotiations all day and night. Jon found a camouflage hat and thought maybe she would think it was “crazy” enough.  I knew better.  Sure enough, she dismissed it within seconds.  Jon and I went downstairs to try to find something else.  I gave up after two minutes but he stayed down there. 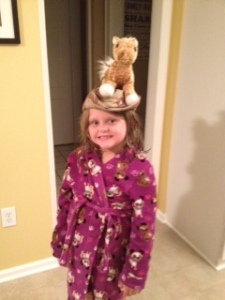 About ten minutes later, he sauntered up the stairs.  He was holding the hat and a stuffed animal horse.  I didn’t put the two together. He walked over to Maria and told her he had an idea for a hat.  He put the horse on top of the hat and tied the string on top of the horse’s back to secure it.  He put the hat on her head.  It was perfect… and Maria loved it.  She gave Jon a huge hug and ran to look at it in the mirror.  She even avoided a fuss when I took her picture.

Problem solving is one of Jon’s finer traits.  You have no clue that he is even contemplating the problem but then he comes up with a solution out of the blue when you have either resolved that it won’t be fixed or you are continuing to come up with a way to fix it.  There are times that we are sitting around after talking about some issue I had during the day and he mentions a way to solve the issue while I am on another completely different topic.  His brain constantly churns until he finds a way to help out the people he loves. And I love him dearly for that.  And Maria surely does, too.